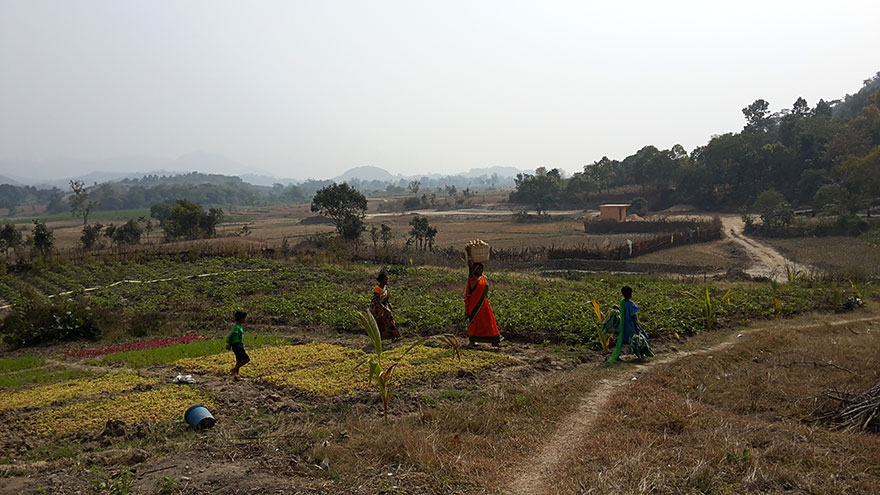 We would like to share with you some pictures of the yearly rice harvest at Dayalu Baba’s ashram. This is the second year that we have helped this ashram to produce rice and vegetables so that they can move towards being self-sufficient.

Dayalu Baba is a sadhu who has been living at the base of a sacred mountain on the edge of Orissa’s Simlipal forest range for many decades. I first visited his simple ashram around 8 years ago. At the time he had a single mud hut, with a thatched straw roof, but there was a hole so big in the roof that he had more hole than roof. When it would rain his hut provided very little protection from the elements.

Usually straw roofs have to be changed every one or two years, or the straw begins to rot and fall apart. Being a very poor sadhu, and living in a remote area where no one would visit him, he didn’t have any means to repair his straw roof. Despite the hardships, he had remained at that spot in the forest because it was a very powerful siddhi sthana, where many rishis had performed tapasya in previous yugas. Sages such as Vyasa, Narada, Buddha, and the Sapta Rishis, as well as avatars such as Lord Rama and Lakshmana had stayed at this location.

After getting to know him I could understand that he was a very special soul, having done sadhana for decades at this spiritually powerful location. At first we tried to help him by repairing the roof of the mud hut that he was staying in. Despite helping, still we didn’t understand the full extent of the poverty that he and the other sadhus staying at his ashram were going through. I didn’t understand it till a later trip.

One day we went to visit his ashram, and as is customary when visiting sadhus, we bought some simple sweets (rasagulas) in a shop to give to him. We arrived at his ashram around 2 pm and gave the sweets to him. Usually in most ashrams that we had visited, when we give the sweets the sadhus will put them on a plate, bring tea and distribute the sweets among the devotees present while drinking the tea. In this case Dayalu Baba kept the sweets to the side and only brought red tea (tea powder and water with no milk).

We all drank the red tea, but in the back of my mind I was wondering why he had not distributed the sweets we had brought. We spent the day and night with him talking various topics, then it was time to sleep. From the time that we had taken the red tea in the afternoon till the night we observed that there was no other food that any of the sadhus at the ashram took. We were feeling hungry, but for us it was only one night so we tolerated it and went to sleep. The next morning we got up and were feeling hungry, but again we saw there was no food for the sadhus and no one was eating anything. The sadhus went about doing their morning pujas and meditation without any complaint.

Finally around 11 am Dayalu Baba called us to come for breakfast. By this time it had been almost 24 hours since we had drunk the red tea the day before, and we were feeling really hungry. When we sat down, we saw him take out the simple milk sweets we had brought the day before, divide them amongst all of the sadhus present, and that was the breakfast – a few rasagulas each. Now we finally understood why he had not distributed the sweets the day before when we arrived. They had no food for the next day’s meal, so they were keeping the few sweets we had brought them for the next day.

Sometimes we take things for granted. When we see sweets we think why aren’t we eating them, why aren’t they giving them to us. We can’t understand that there are people who don’t have food for the next day, and what we think to be a snack may actually be a full meal for them – or even their entire days food. From that experience I could finally understand the poverty of their ashram, and we began thinking how to help the sadhus so that they could become self-sufficient.

It took some time, but eventually we managed to buy two acres of farm land adjacent to their ashram and donated it to the sadhus so that they could grow their own food. This is the second year that they have harvested the rice, and this year they have also grown some other vegetables as well as toor dahl. Below you can see some photos of the planting and harvesting of the rice and vegetables from this year.

If you would like to visit and spend some time with sadhus at Dayalu Baba’s ashram please send us a message and we will try to help you. Staying is a bit austere, but associating with real sadhus is a great spiritual gift worth all of the effort and hardship. 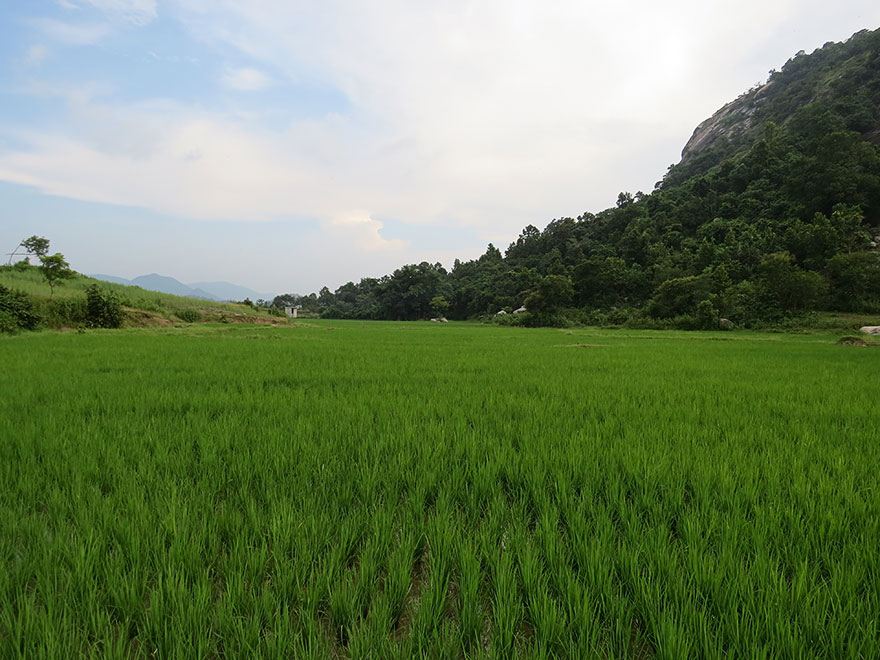 The ashram is located in the forest in the distance. 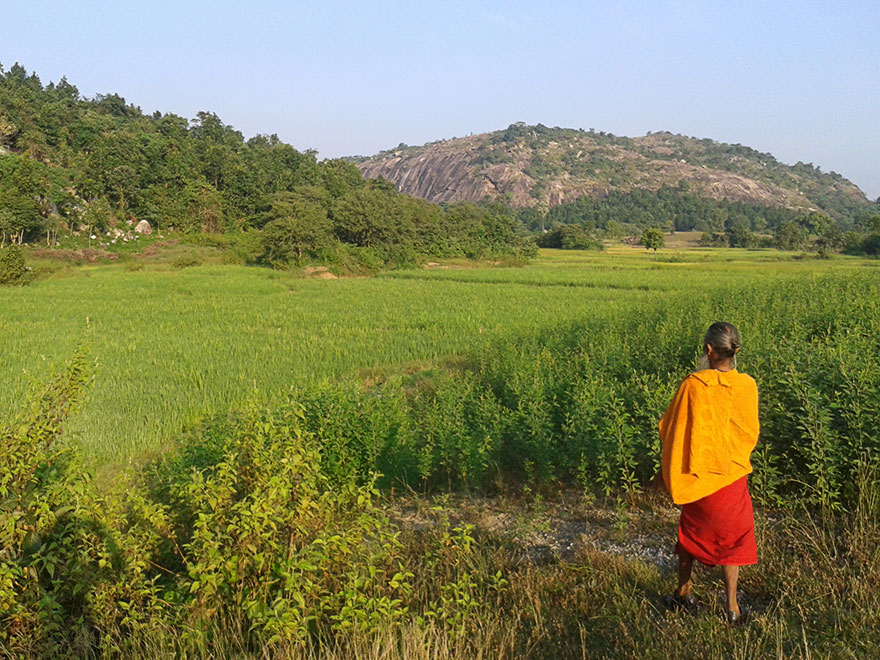 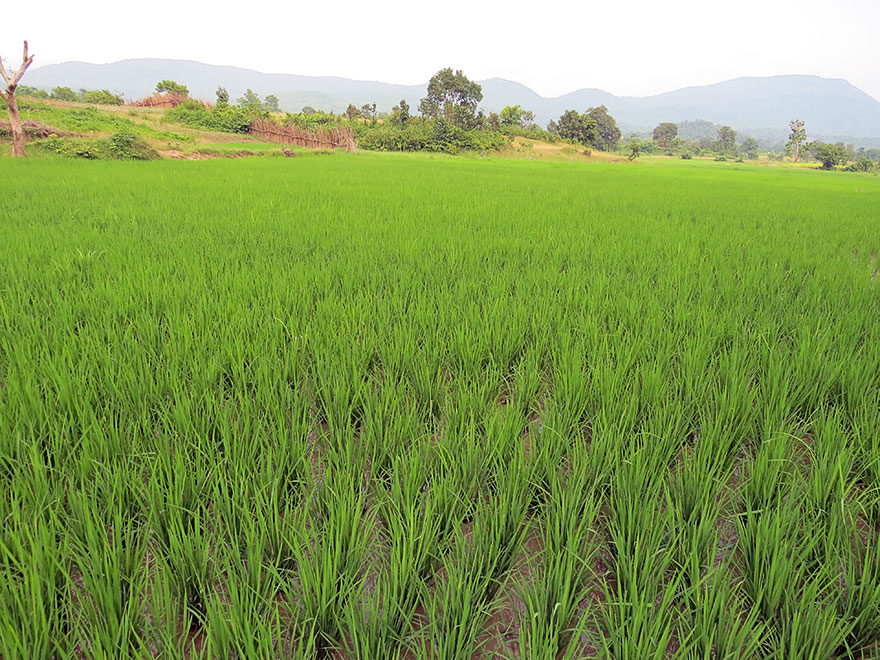 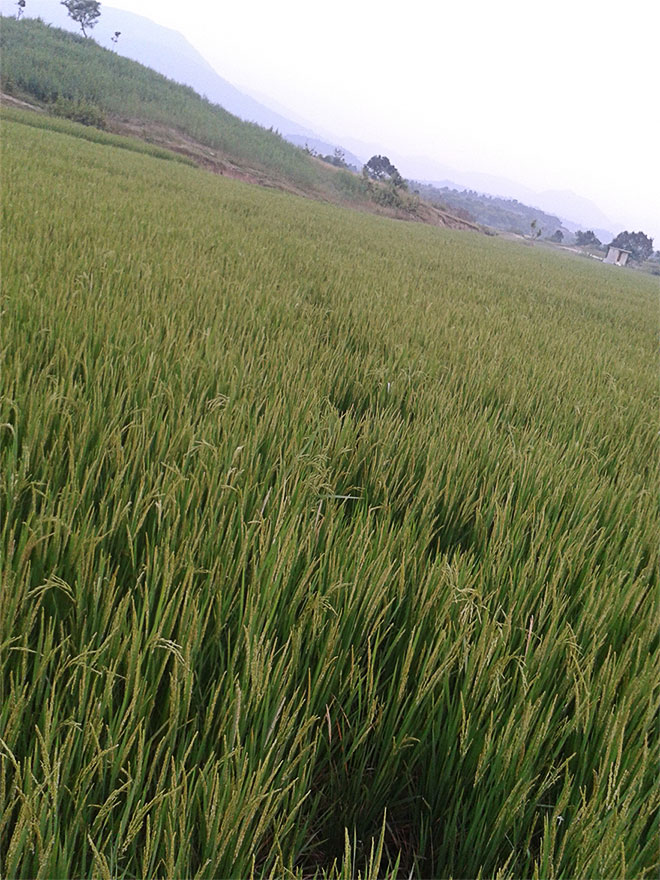 An elephant had walked through the ashram’s rice field. 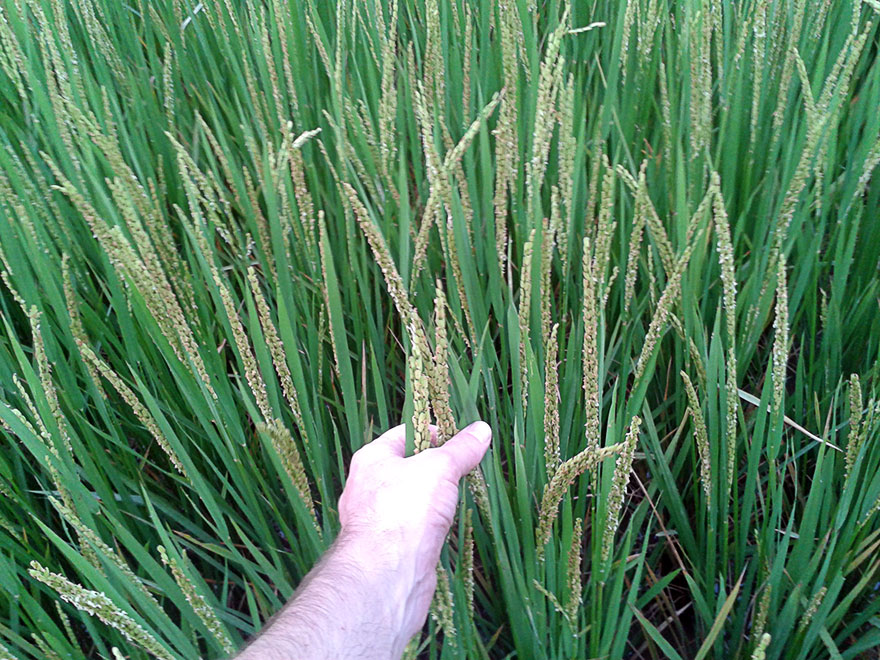 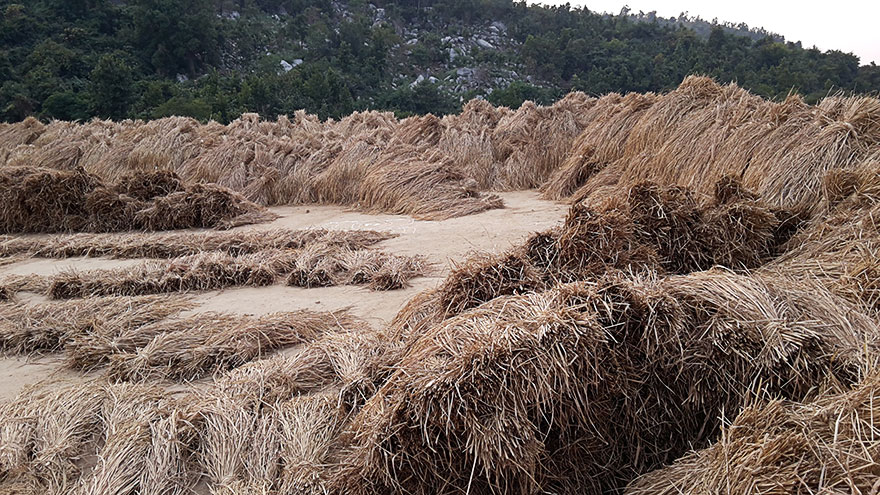 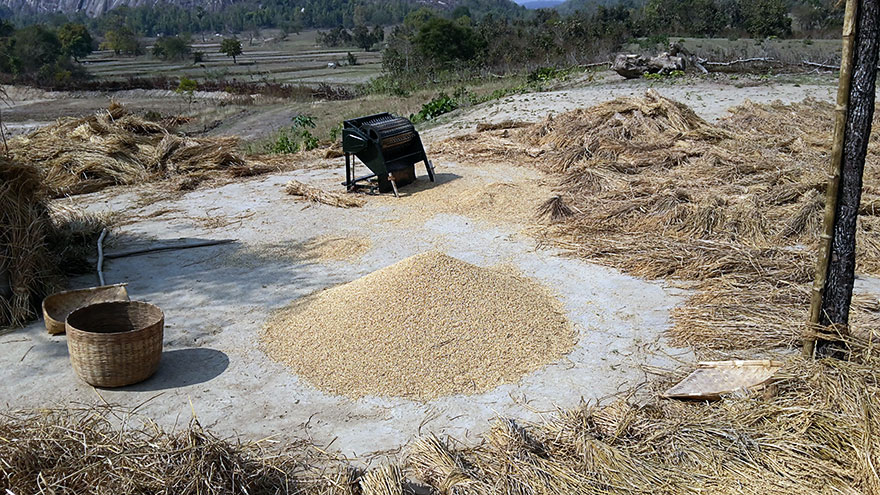 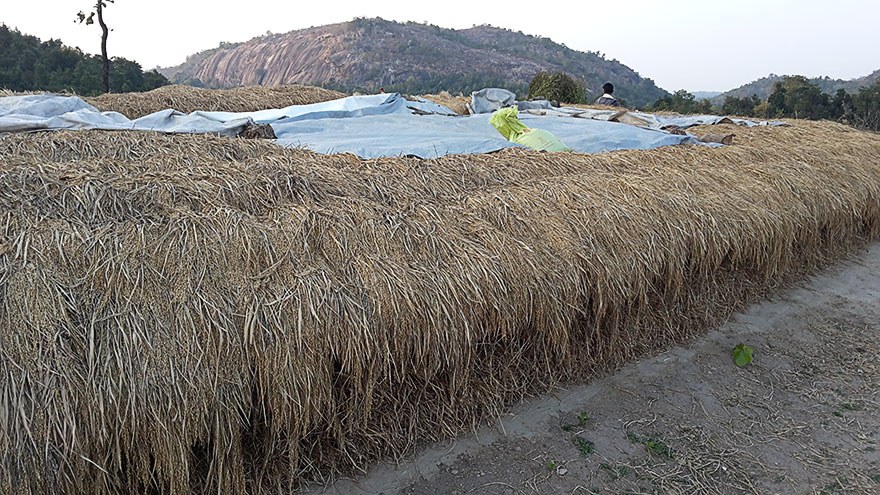 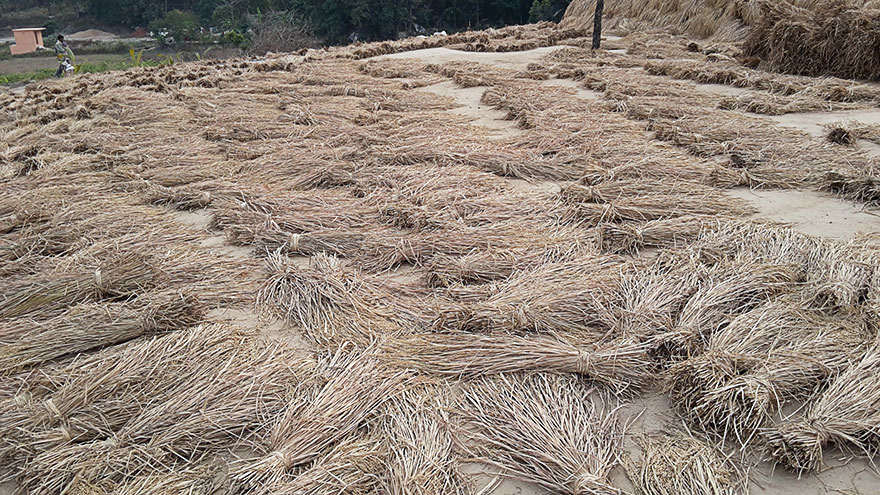 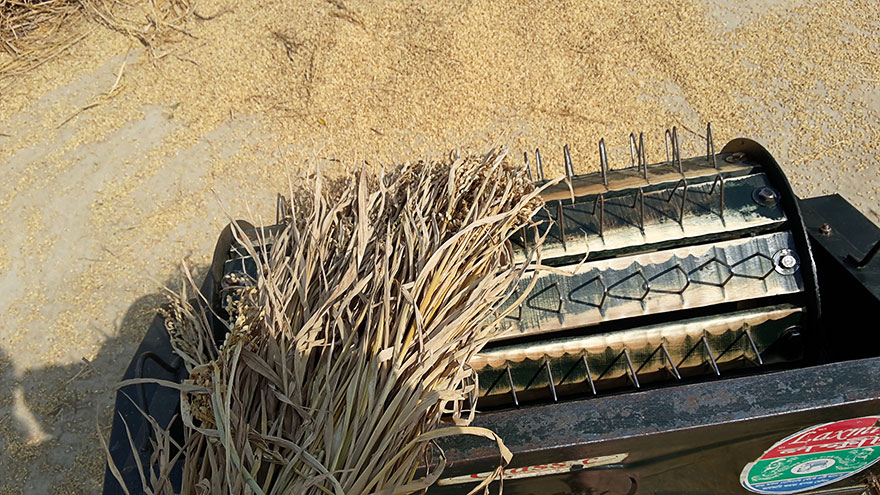 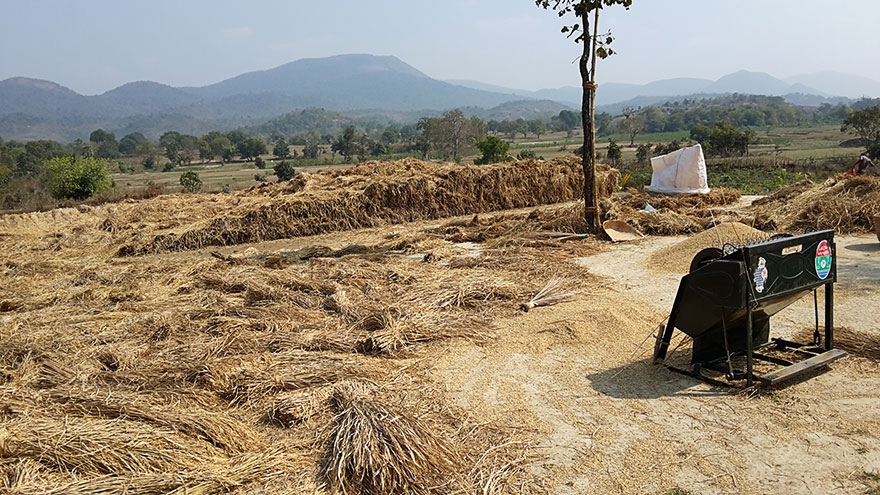 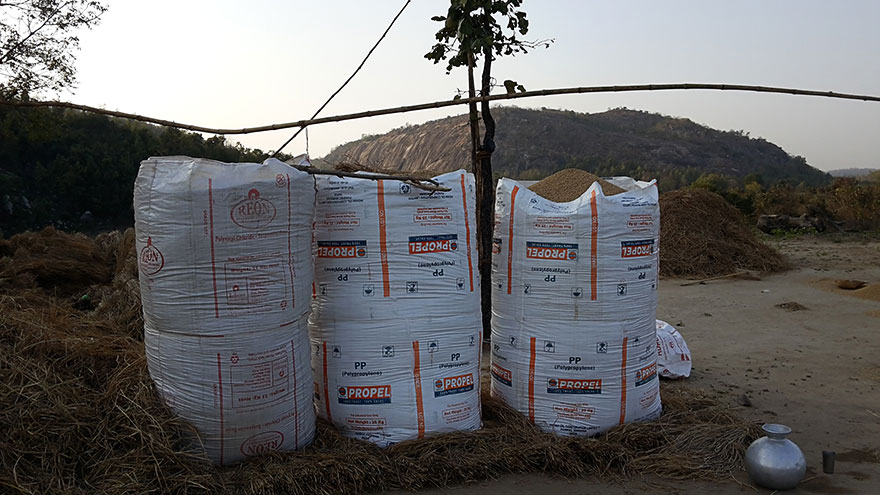 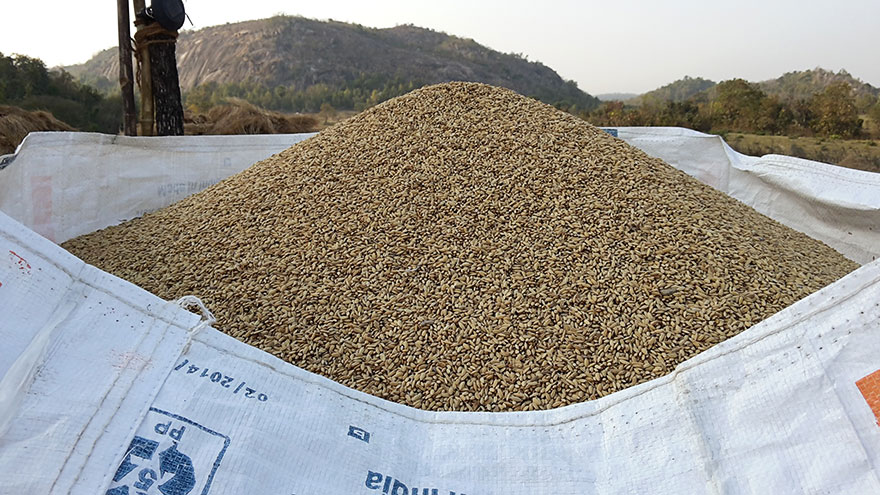 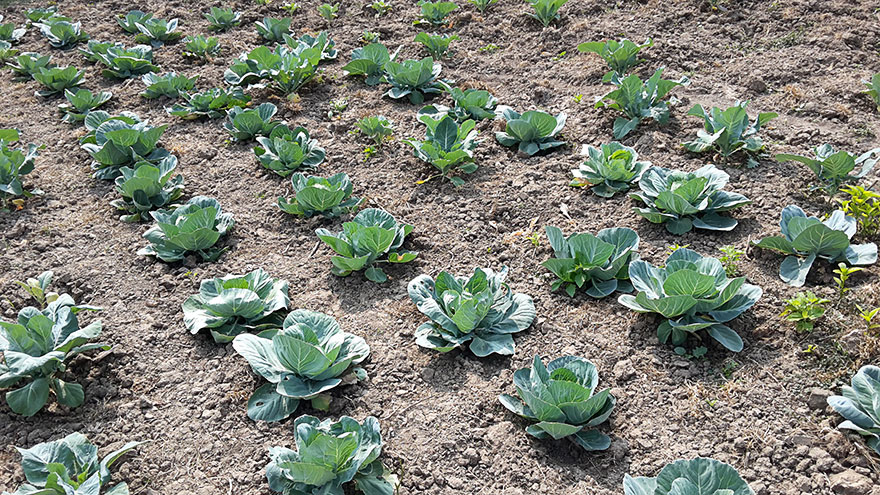 Growing cabbage in the ashram’s garden. 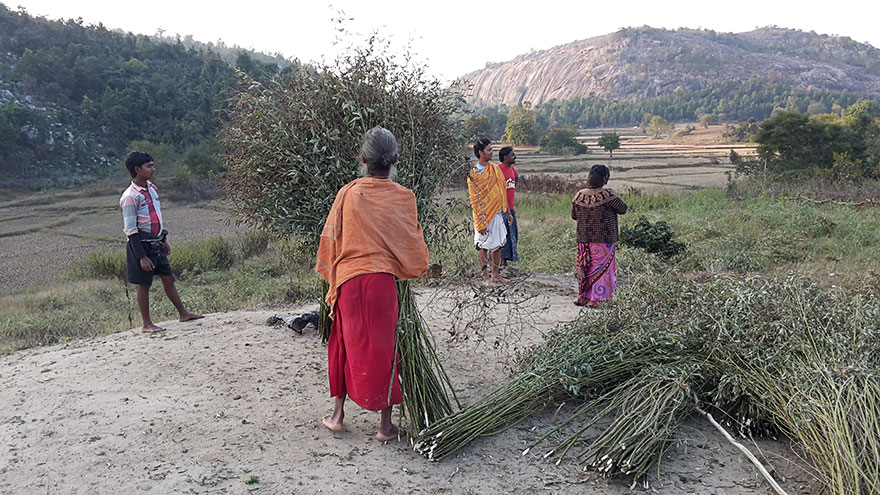 Harvesting toor dahl plants to dry in the sun. 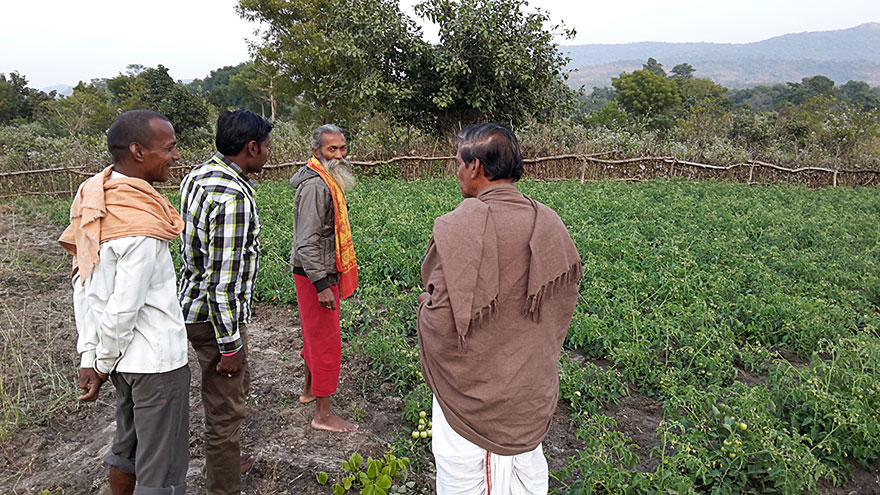 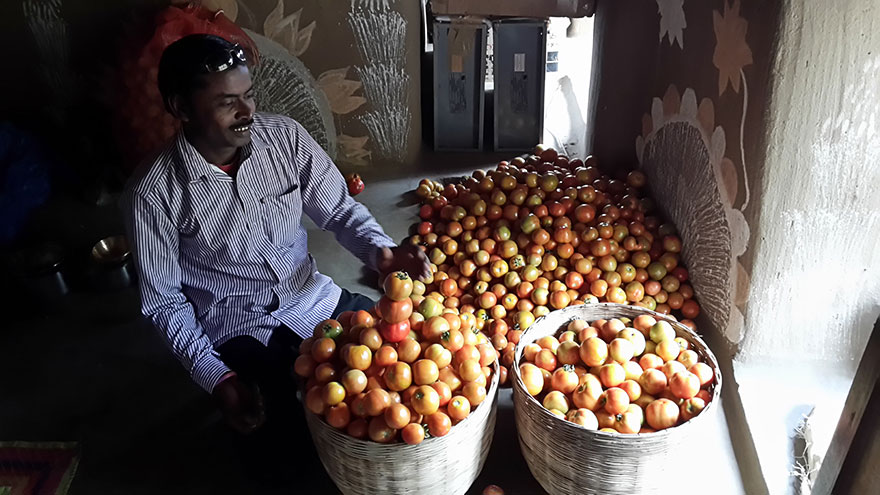 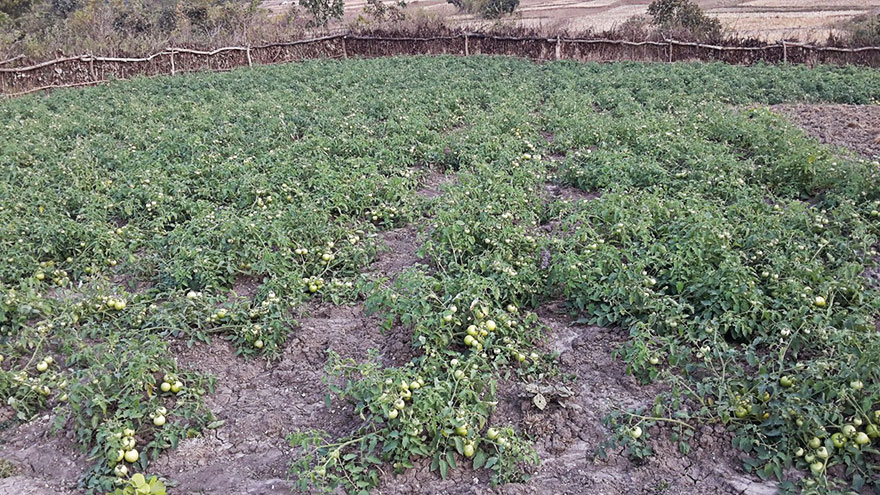 A view of the tomato garden at the ashram. 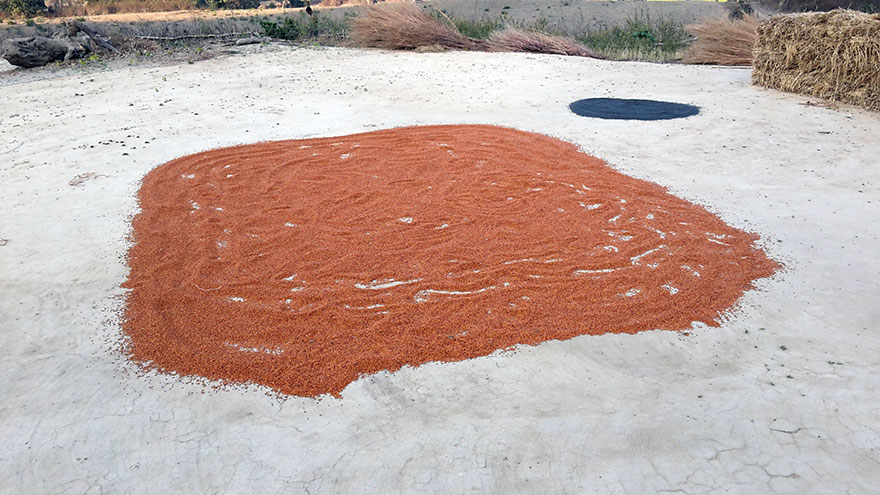 Drying toor dahl (red) in the sun along with mustard seeds (black). 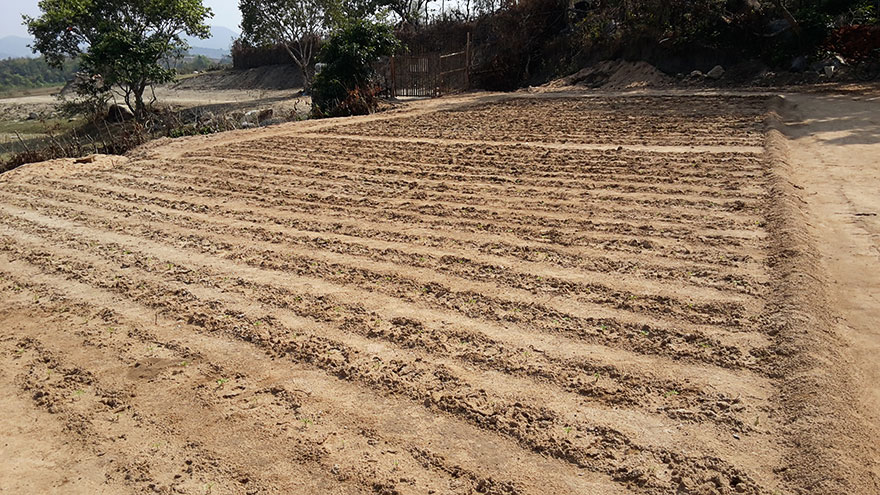 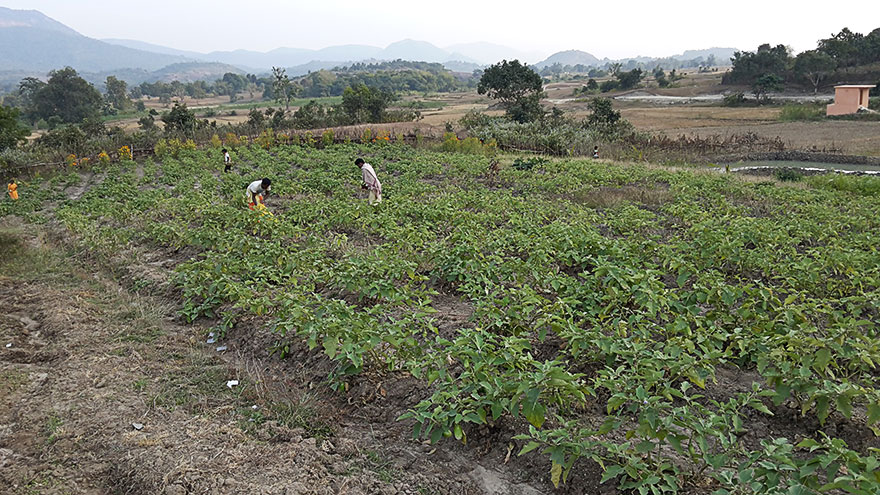 Devotees harvesting eggplants from the garden. 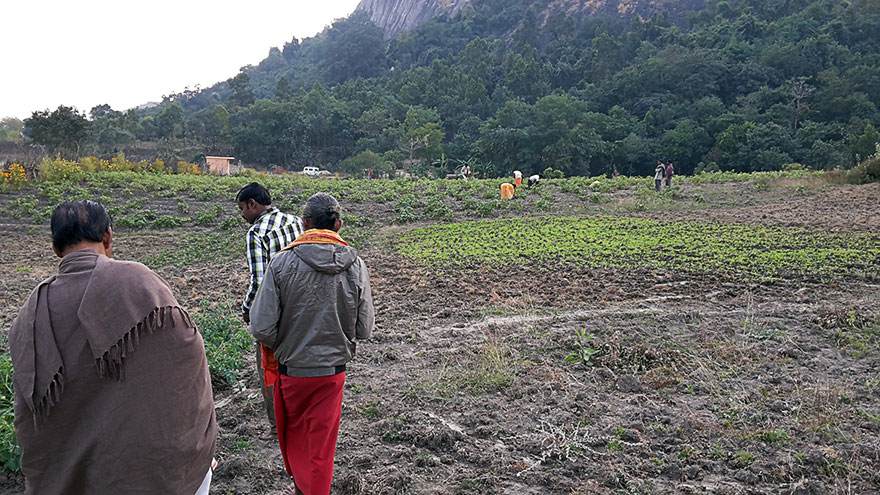 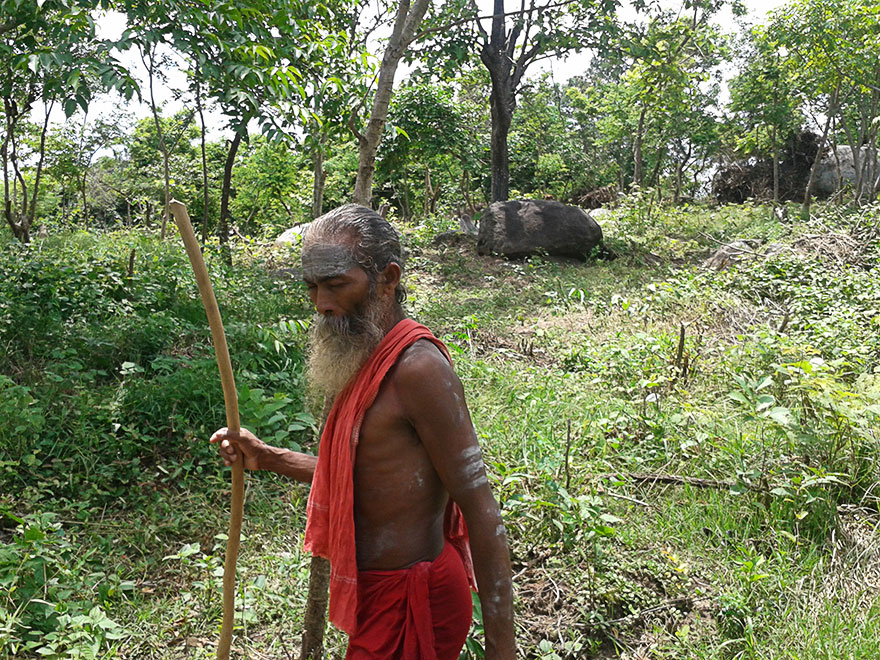 Dayalu Baba walking in the forest.

80 comments on “The Rice Harvest at Dayalu Baba’s Ashram”