Vadalur Baba, One of the Greatest Saints and Mystic Yogis, Entered Samadhi on Amalaki Ekadashi 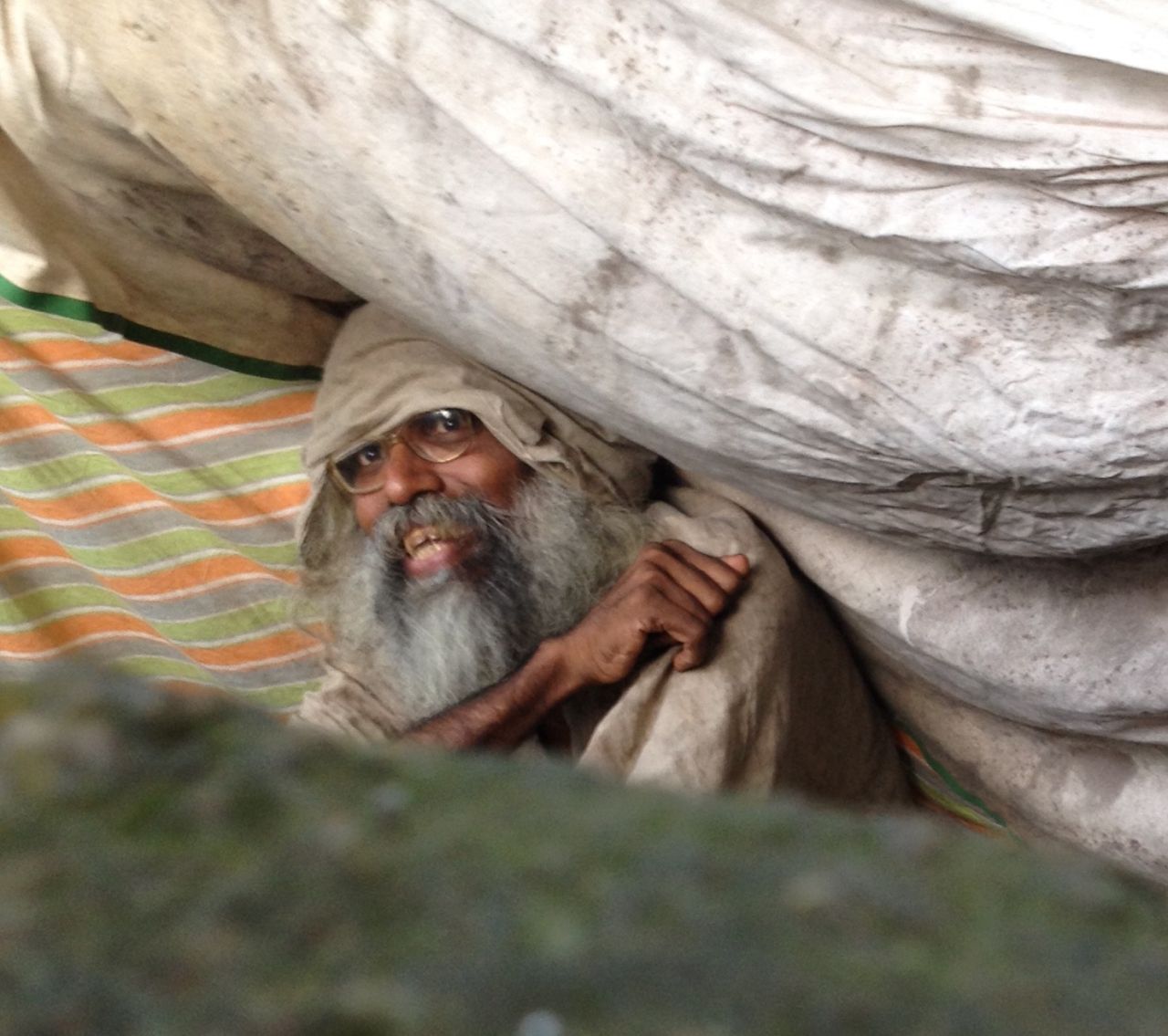 Two days ago, on the auspicious occasion of Amalaki Ekadashi, one of the greatest saints and mystic yogis I have known in this life has entered samadhi and left us. He was an amazing personality who could see past, present, and future, and just by looking at you he knew everything you did, your background, your problems, and all varieties of details about you.

This baba lived in a garbage pile in the tiny village of Mettukuppam, near to the city of Vadalur. He stayed just outside the boundary wall of the temple and siddhapeetam of saint Vallalar (Ramalinga Swami), who had dissolved his body into divine light in 1874 at this location. 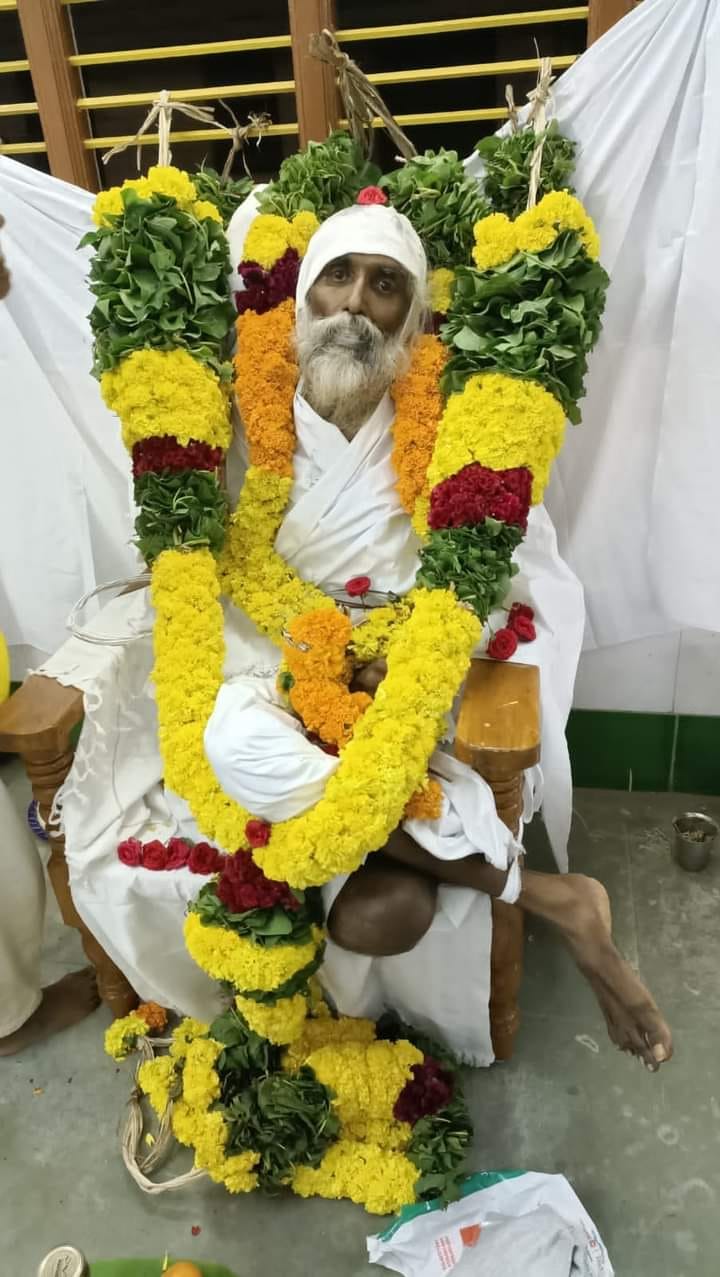 Look carefully at this photo above. You will be surprised to know that it is a photo taken of Baba after he has left and entered samadhi. Look into his eyes. Have you ever seen someone look so alive after leaving? His entire body is full of light and radiance. I have never seen such an expression before in someone who has left us. You can notice that they have tied his foot up, since he has already left the body. Looking at this photo without knowing, no one could think this was not a living person.

Baba did not allow anyone to photograph him, so pictures of him are very rare. He did not want people to know about himself or to congregate around him, as it would disturb him from doing his own spiritual sadhana. He told me, “If people come now, they will drag me down to their material level of consciousness. One day if Bhagavan blesses me to be very spiritually powerful and gives me the strength that I can lift them up to my level then we can let them come, but now is not the time.”

Because of his desire I withheld mentioning his name or location for 15 years. He said if people knew about him the negative asuric forces would come to disturb him. 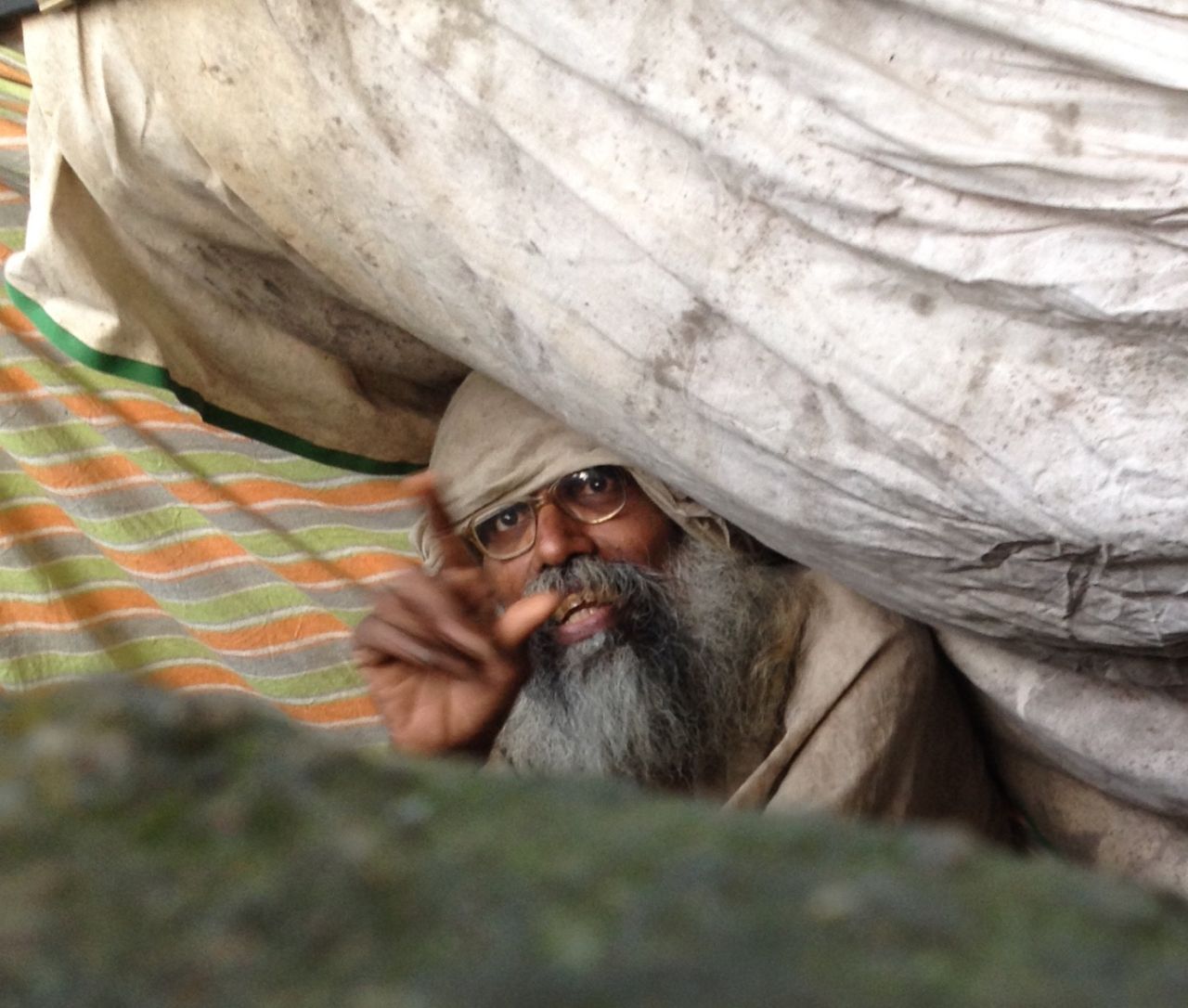 Baba had no known name, but we called him Vadalur Baba, since the nearest city is Vadalur, and the city of Vadalur at one point in time had the famous ashram and residence of his guru saint Vallalar. Some locals called him Mauna Siddhar, because he spent 12 years in silence without talking.

Once he asked me, “What name do you call me amongst yourselves?” 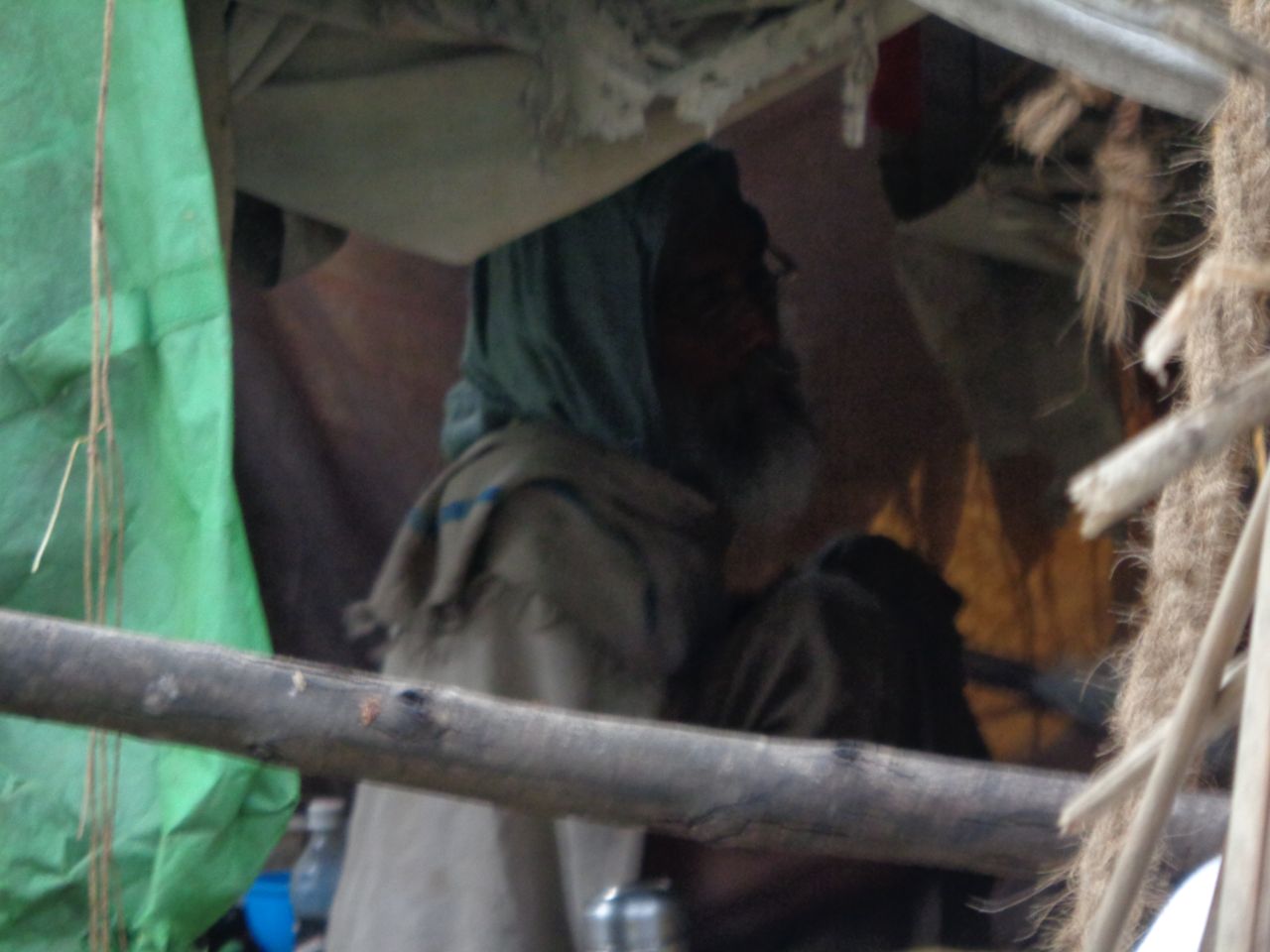 When I first met him he was undergoing the vow of silence and would only communicate with sign language. I had seen him observing this silence for many years, and then one day long back when I came to see him, I was shocked that he was now talking to me. He told me a divine higher power had activated his silence within his body, beyond his control, and like a switch the same divine power suddenly turned it off and allowed him to talk exactly after completing 12 years of the vrata. 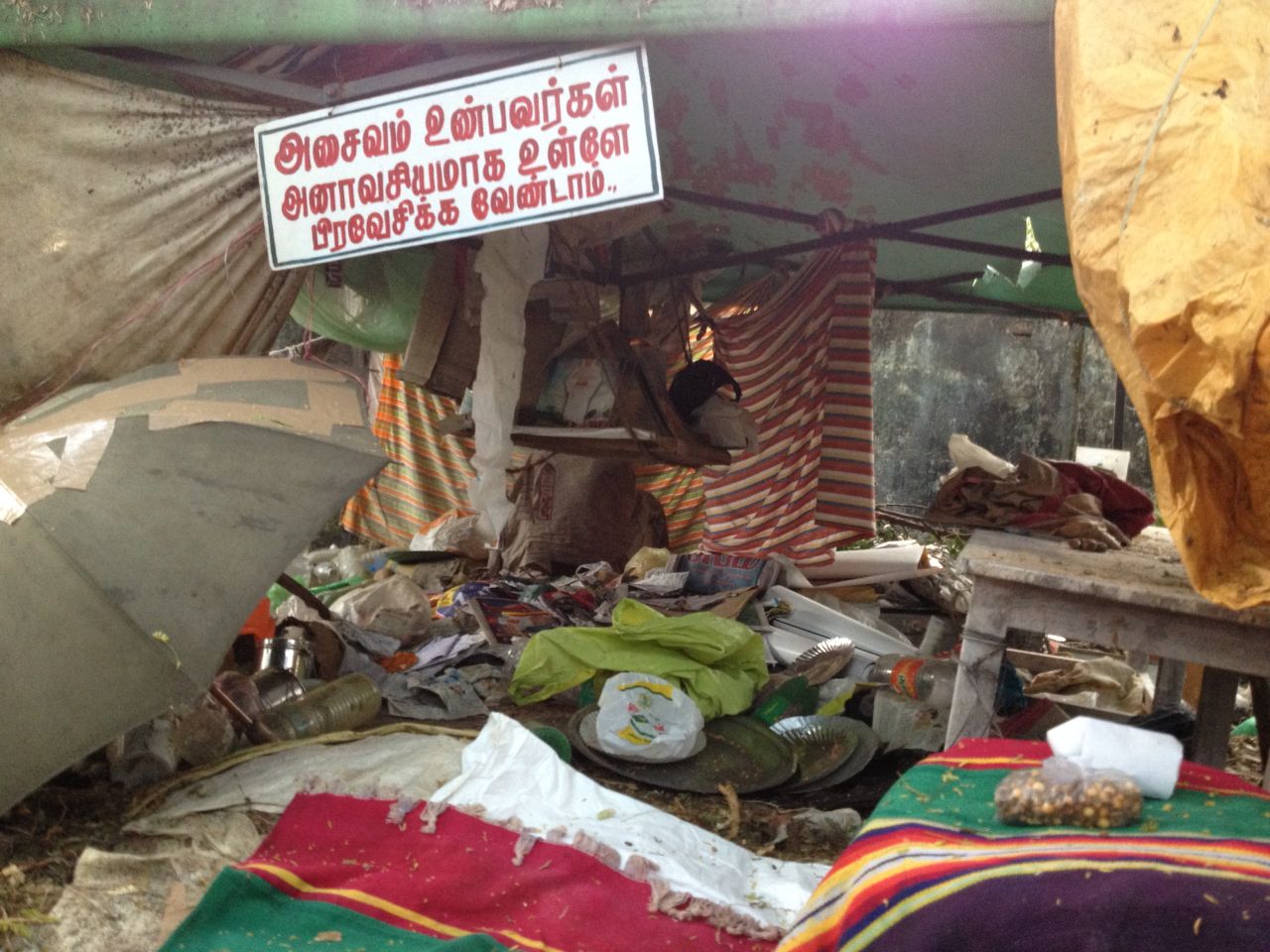 At first he only spoke Tamil, because he had forgotten the use of English after so many years of not speaking. Within a few months his remembrance of English came back and he was speaking fluently in both English and Tamil. 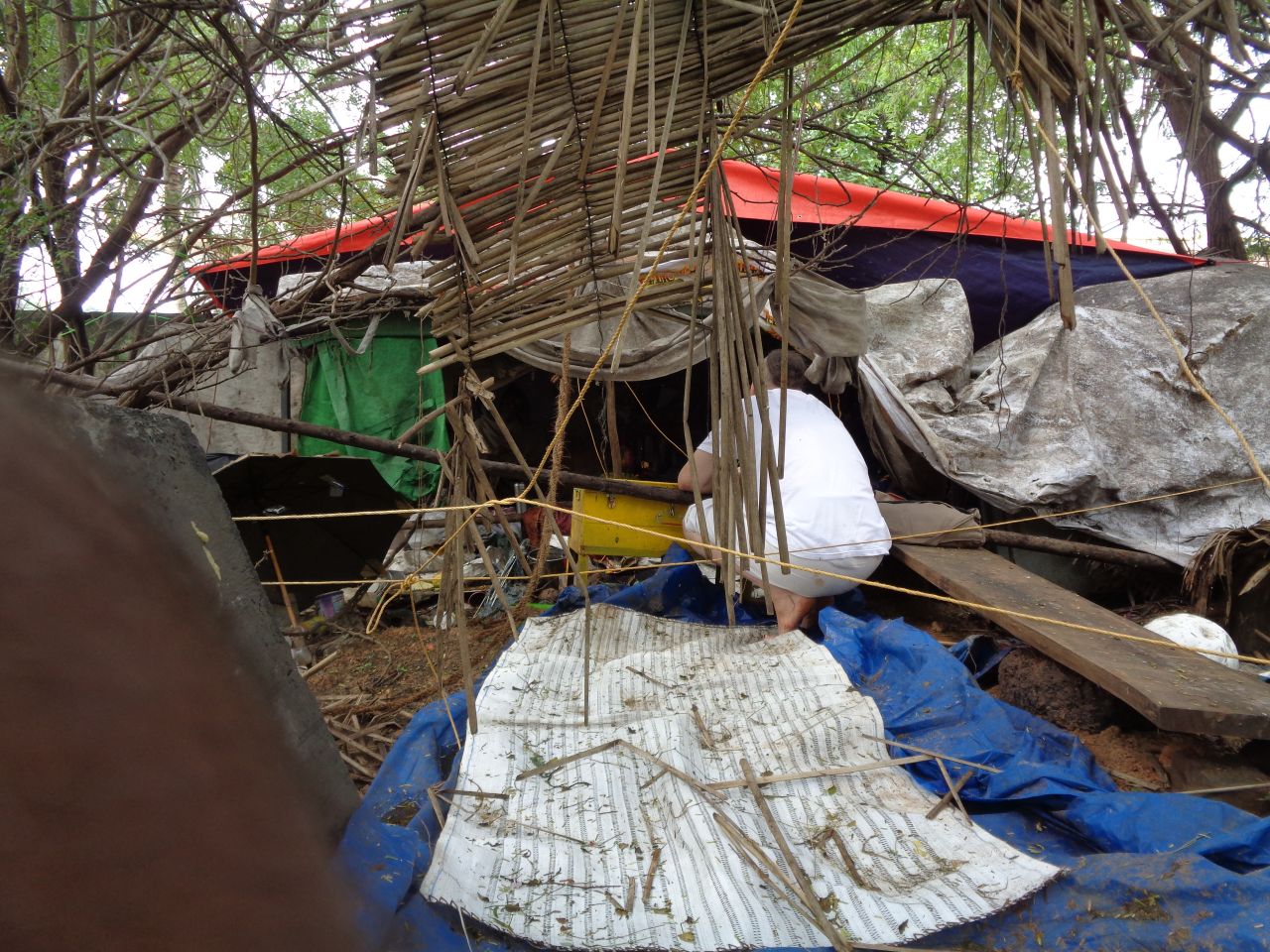 Anyone who came in front of him, he could just look at them and tell everything about them, about their past, their future and their problems. He would tell people to stand silently some distance away from him, and then he would observe their karmas for a long time. If he was satisfied that they were good people he would allow them to come closer, but if they were very sinful he would hide himself and tell them to go away. 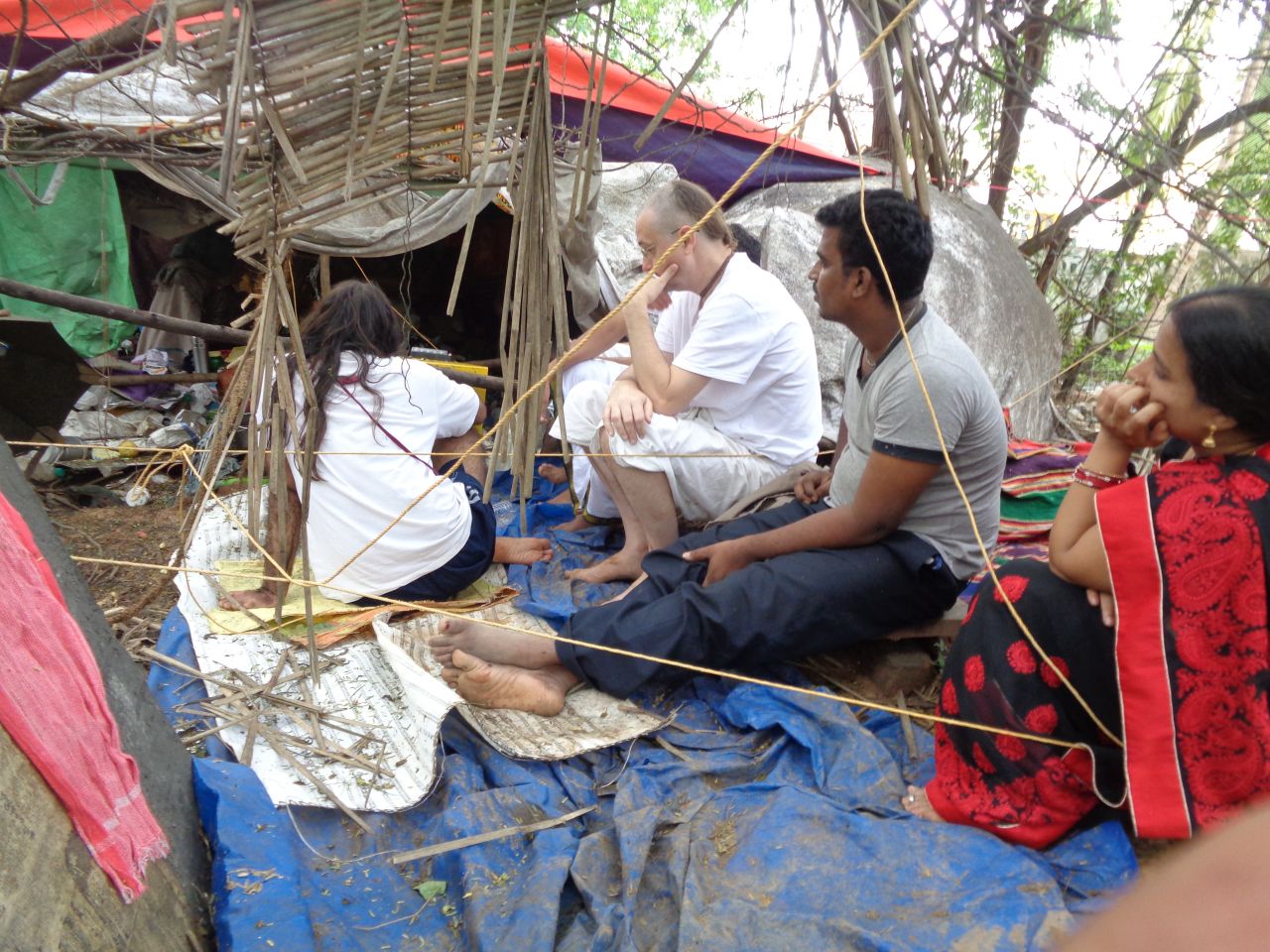 He told me that when very sinful people come near him he loses connection with the divine voice who communicates with him. That is why he hides himself under a shamee vriksha (thorn tree), which looks just like a pile of garbage externally. 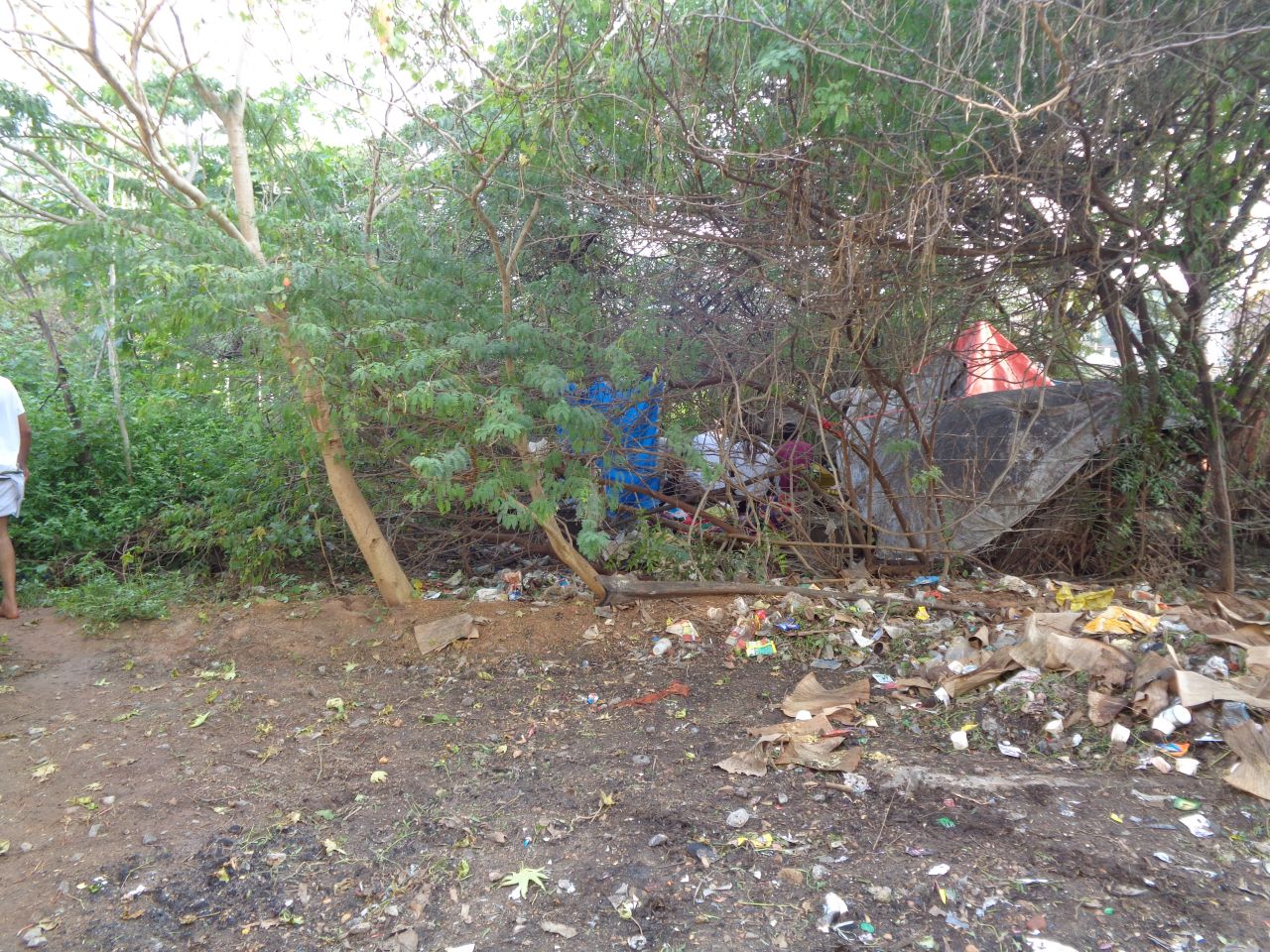 There are so many amazing stories I can tell about him, but then this will become too long and too tangential. Maybe in the future I will write about the things he would tell us and our experiences with him. 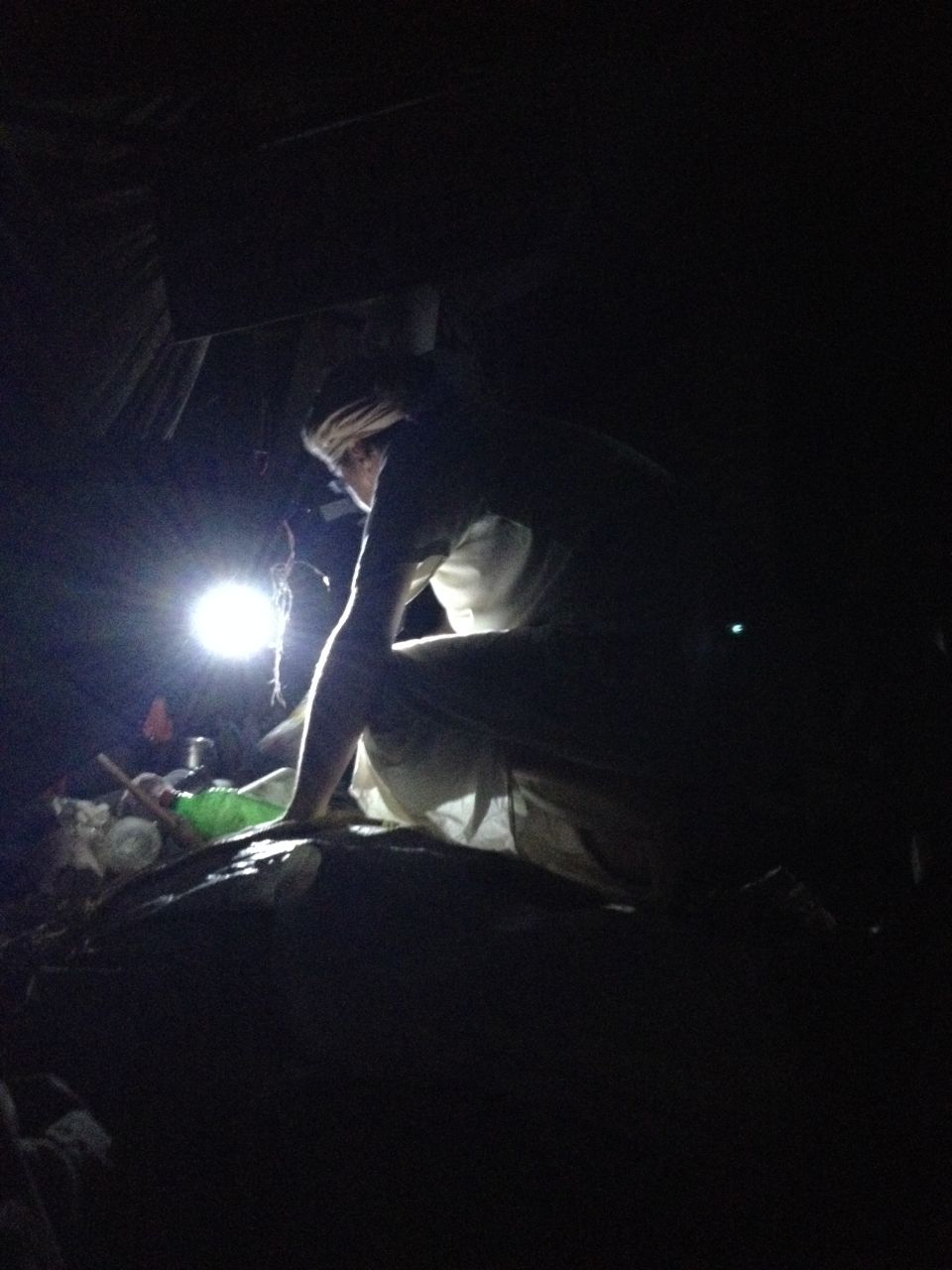 As far as his background, I know that he was a robotics scientist and that he had lived in London once upon a time, perhaps many decades ago. He told me that in the beginning he used to roam around the samadhi of Pamban Swami in Chennai. He said that Pamban Swami was an expert at opening the agya chakra. One day while roaming at this samadhi, Pamban Swami opened his agya chakra, allowing him to experience the other world. This is as much as I know about his background. 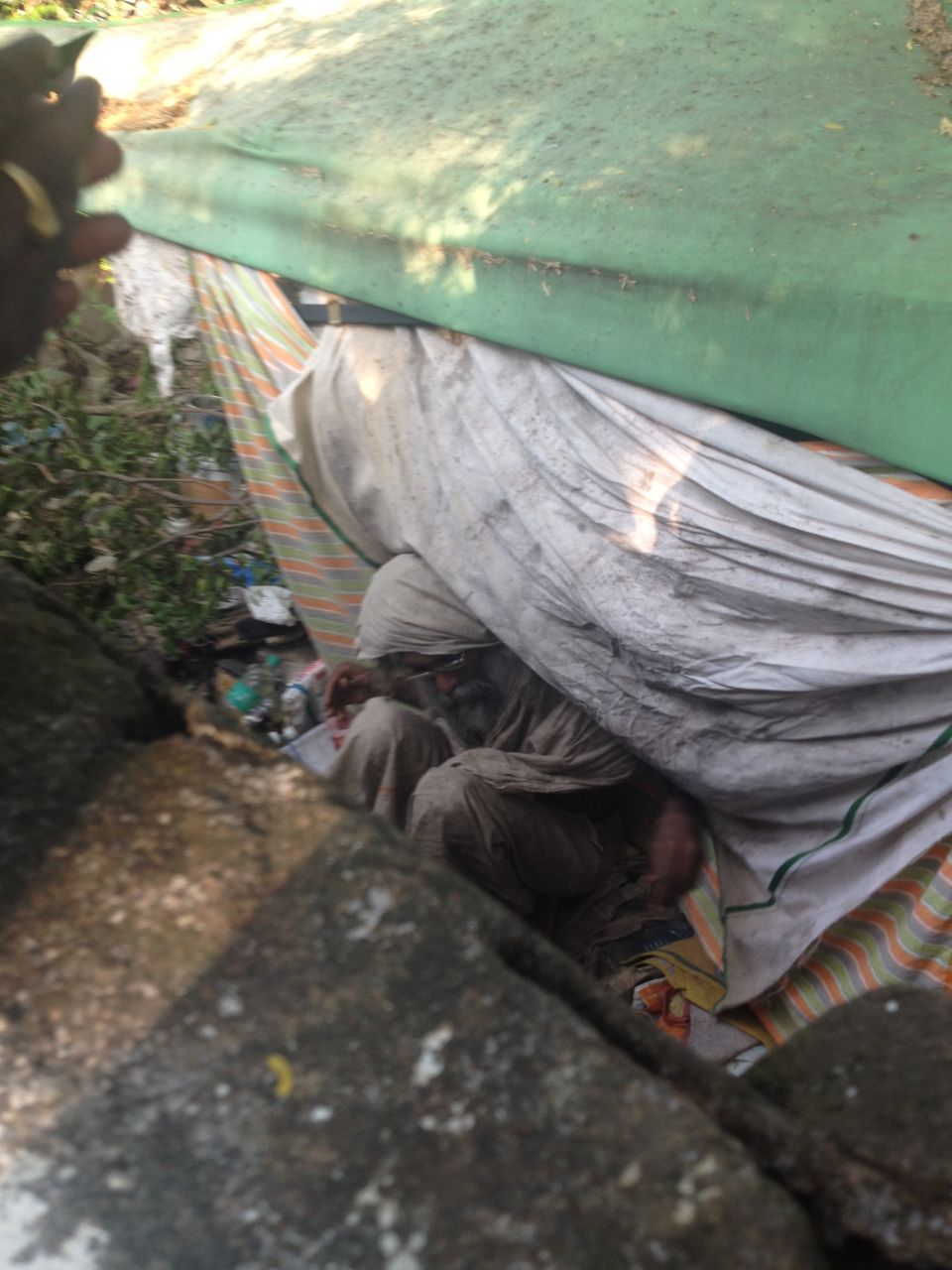 While living he specifically did not want anyone to pray to him or offer obeisances. He would get very disturbed if he saw anyone offering him any respects. When calling me near him, he would always say, “You come inside and sit here, but don’t pray to me or I have to send you back out.” Once out of habit I folded my hands in namaste greeting, he immediately became disturbed and said, “Don’t do that, you are trying to pray to me. You go outside.” 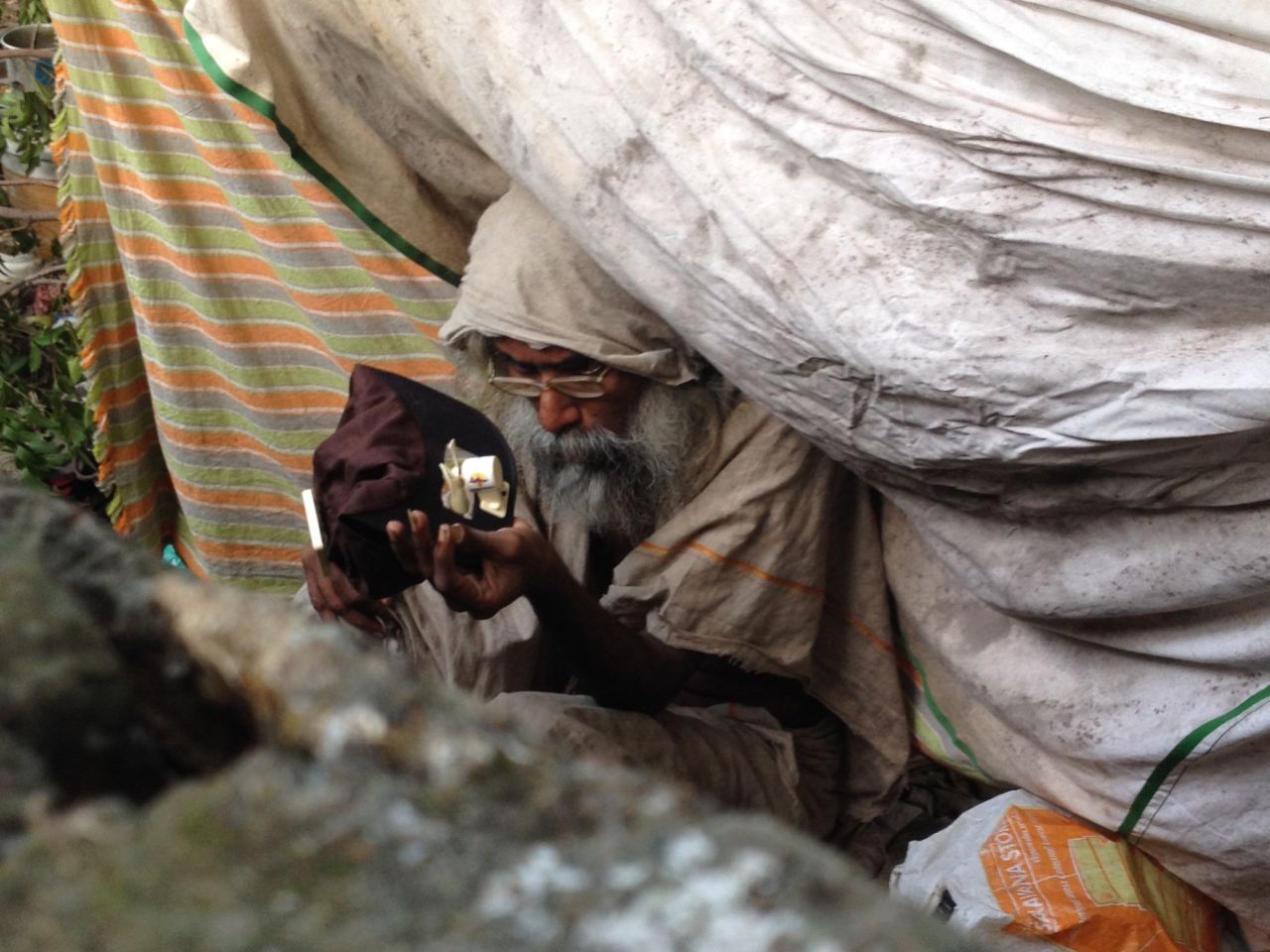 He also would never touch money of any kind. He would not accept any donation of money. You could only give him fruits if you wanted to give something. Once in the early days of visiting I had brought 10,000 Rs. I wanted to give to him as a donation. When I told him, he thought for a minute and said, “That man over there has a problem and has no money to feed his cows. Why don’t you give him the money you brought, then both of you will be satisfied. He came praying he needed money, and you have come wanting to donate money, so let us unite both of you and I will not be involved in dealing with money. Prabhupada wanted you to protect and feed cows, so I think it is meant for you to give him the money.” 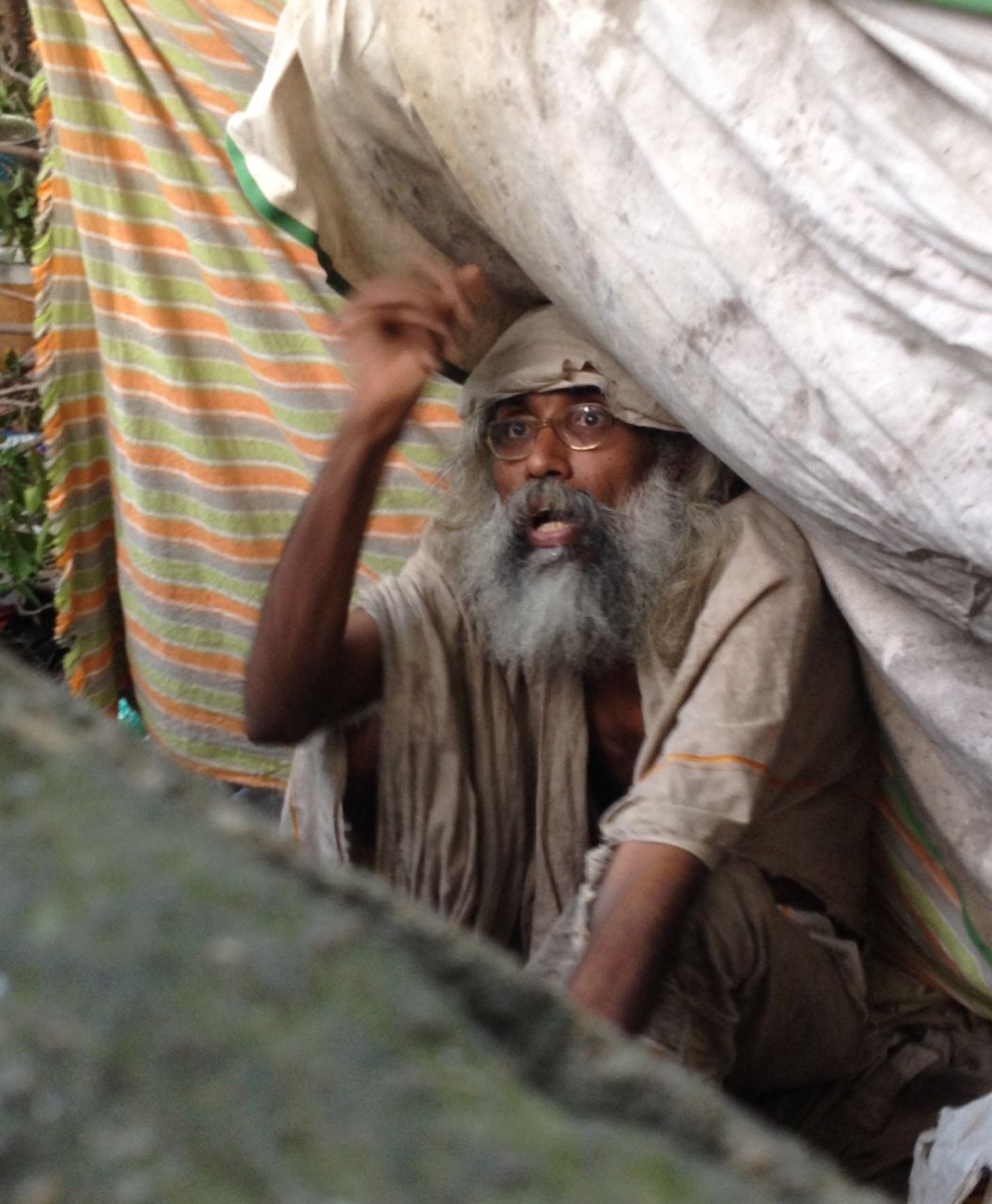 Five days before entering samadhi he told one of his followers he would be leaving. He gave complete instructions on how to make the samadhi and what to do with the body. He said any material used to build his samadhi should be natural and not cause harm to any living entity.

On the morning of ekadashi he got up at 2am and came to the room where saint Vallalar had disappeared into light. He was very happy and was smiling. A devotee came up to him, and Baba said, “I received the message that I won this life.” He then went and sat under a coconut tree for three hours.

This photo above was taken just a couple hours before Baba entered samadhi. He sat under this coconut tree in the compound of the Vallalar temple. He never dressed in clean clothes like this. He always wore old rags. He knew he was leaving and prepared himself for the departure. Everything he did, he put much thought and symbolism into it. I am sure the golden cloth symbolizes a golden crown and he is being coronated for his victory over life.

Once a month the room of Vallalar is opened on Poosam day, which happened to be this day. When the room opened in the morning, Vadalur Baba went inside Vallalar’s room and sat there till the afternoon.

In the afternoon, he left Vallalar’s room and again sat silently under the coconut tree in the ashram compound, as you can see in the photo. After sometime he started losing consciousness, so some local people called an ambulance. When the doctor arrived he wanted to give an injection to Baba and was trying to force it. At this time Baba again came back to consciousness and told them not to give any injection. The doctor left, and Baba, surrounded by some of his devotees peacefully entered samadhi by his own will.

Though he belonged to another lineage of saints, he was very fond of Srila Prabhupada’s books and used to keep them and read them. He would often tell me how great the book “Krishna” was.

It is somewhat mind boggling that someone who was constantly directly communicating with the divine, who could see past, present, and future, was sitting in a garbage pile in a remote tiny village reading Srila Prabhupada’s book “Krishna”.

He was one of my closest friends, well-wishers, and gurus. He showered me with unlimited kindness for 15 years from the first day that I met him. 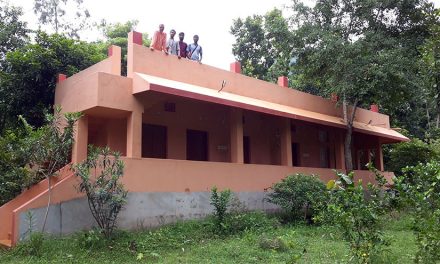 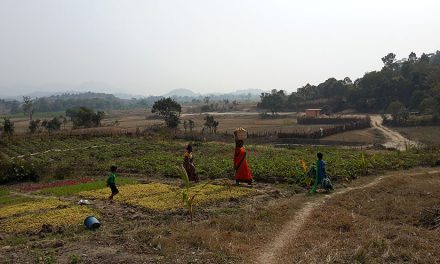 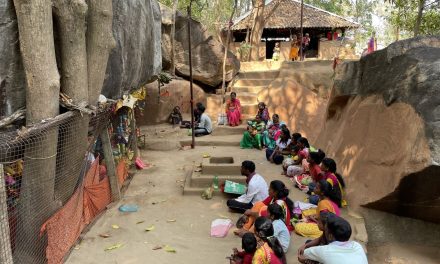 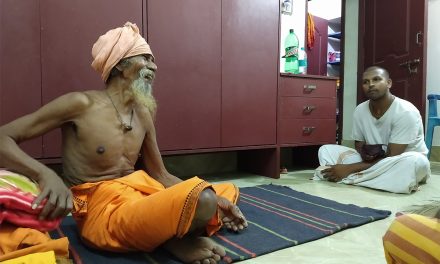