Visiting the Sadhus at Chakratirtha Ashram to Attend the Gita Yagya 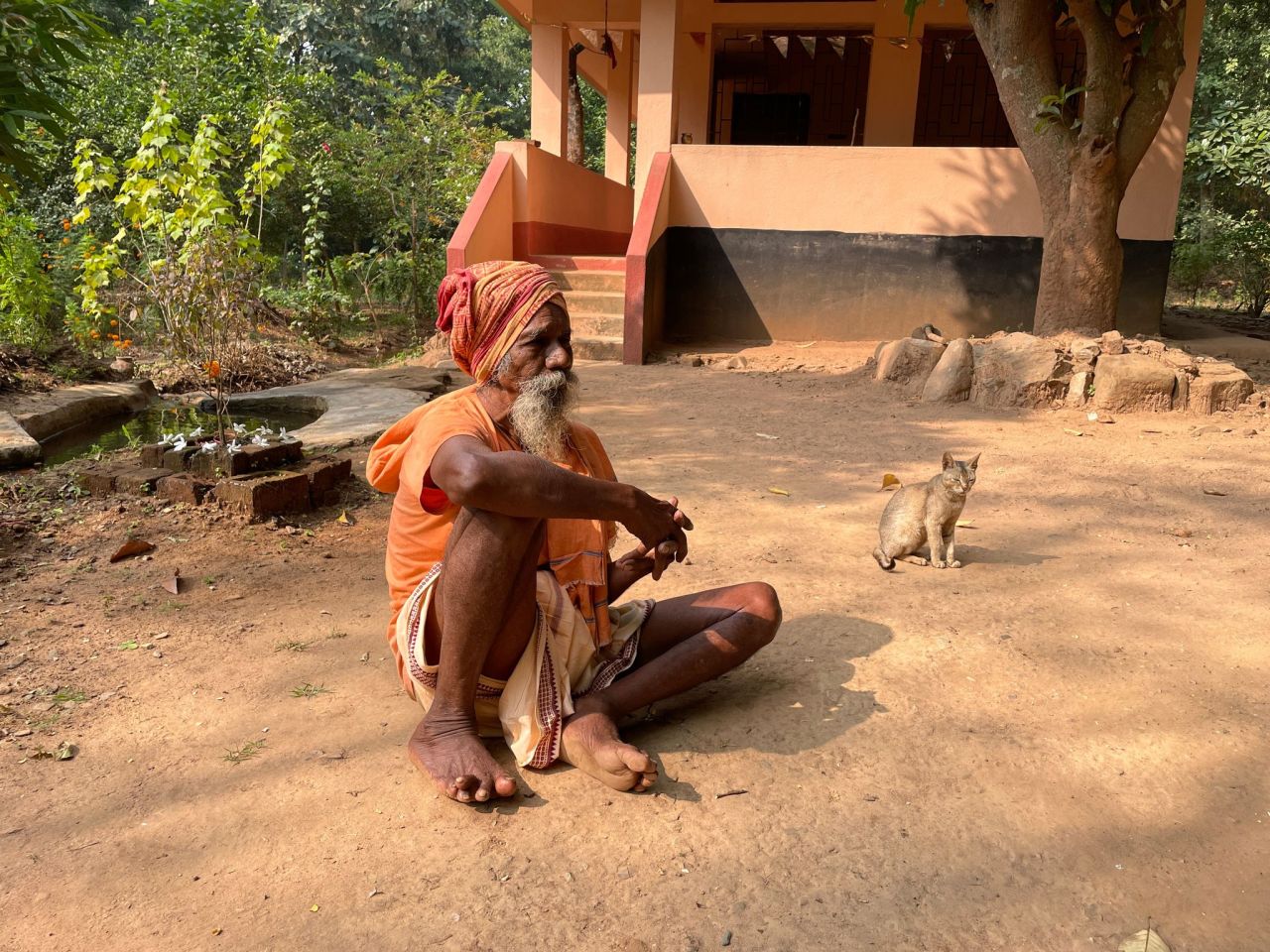 As mentioned in our last post, sadhu Brahma Chaitanya Das had asked us to come with him to attend the annual Gita Yagya festival at Chakratirtha ashram in the beginning of December. Chakratirtha ashram is located in the Salandi Reserve Forest, around 50 kilometers from our ashram at Bhadrak, Odisha. I called my friend who drives an auto rickshaw, and we started the day before the festival. It takes us around 2 hours to reach there from our ashram by auto rickshaw. 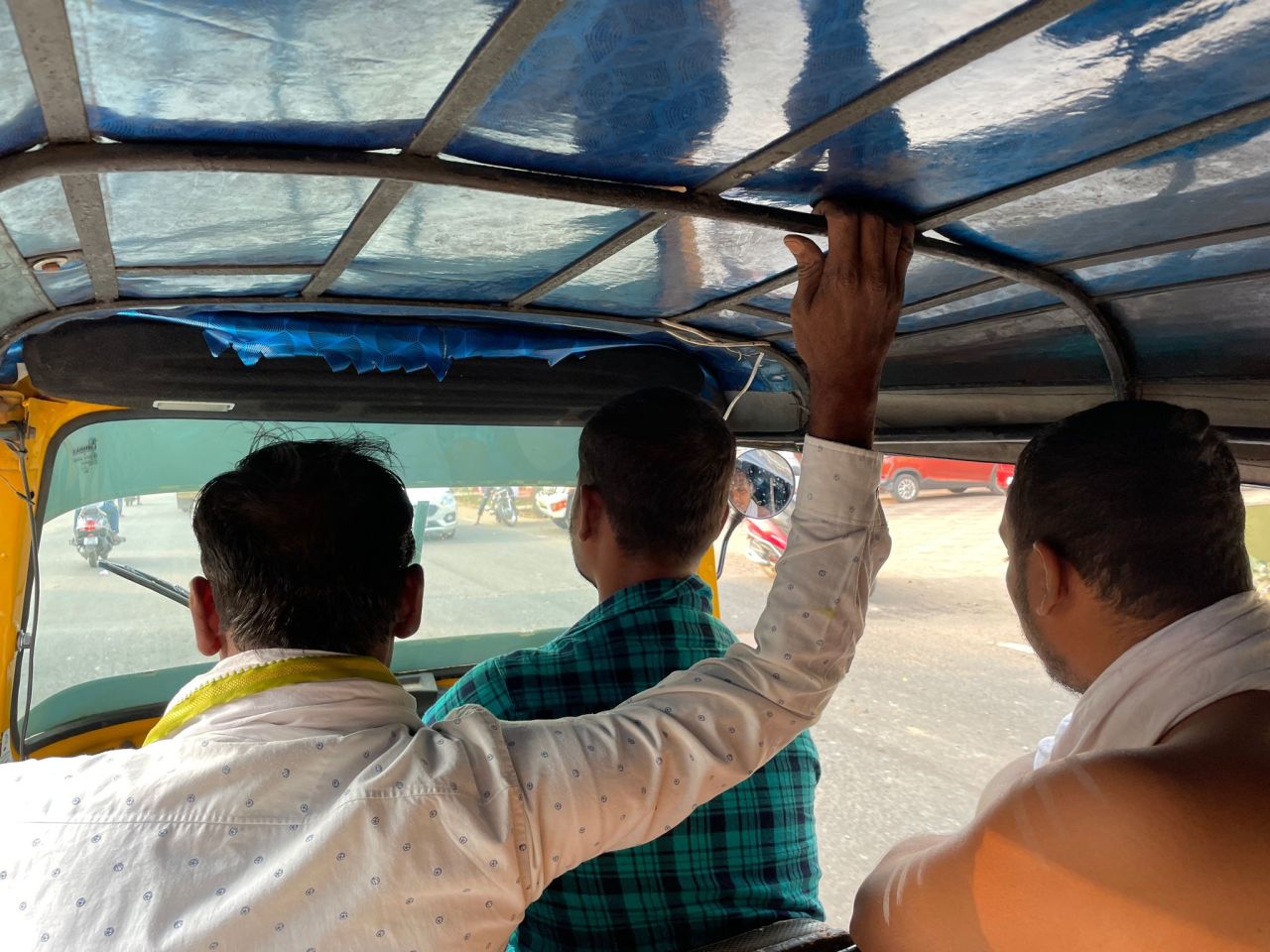 After arriving, we first went to sit with Brahma Chaitanya Das in his room. He is the eldest sadhu at the ashram, over 101 years old, and is known as Chakratirtha Baba. After a few minutes Krishna Baba, another of the sadhus, kindly brought tea and cookies for all of us. 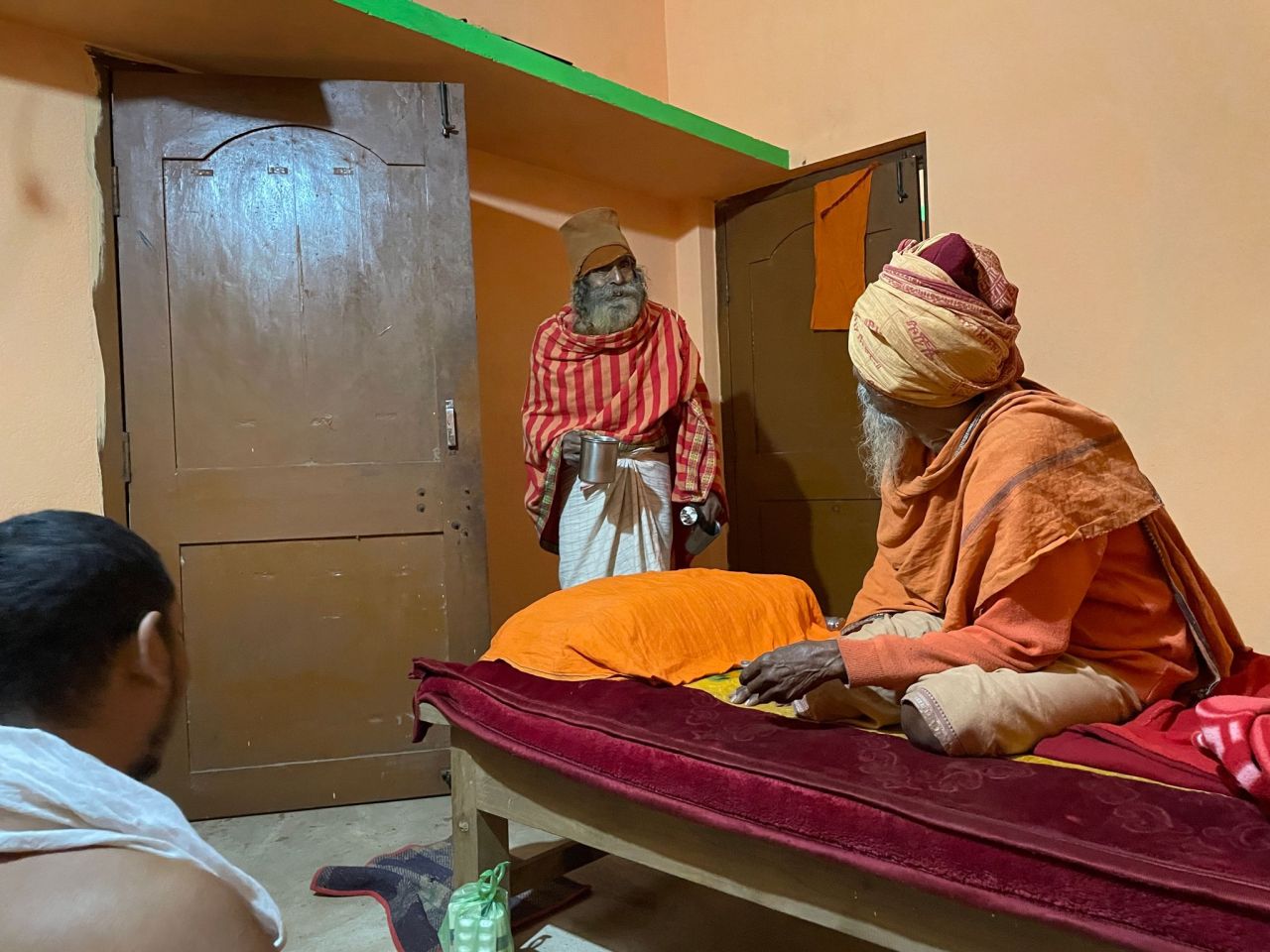 Sadhus often drink what they call “Lali Chai”, red tea with salt and black pepper. It tastes as bad as it sounds, but its inexpensive, and sadhus can’t usually afford milk, especially staying in the forest.

Personally I don’t like the taste, but I drink it out of respect when they bring it. It is very spicy from the black pepper, and the salt makes it kind of unpleasant to drink (for me at least). You get the combination of a burning throat and salty water taste. But they give it with love and kindness, and that is the most important thing. 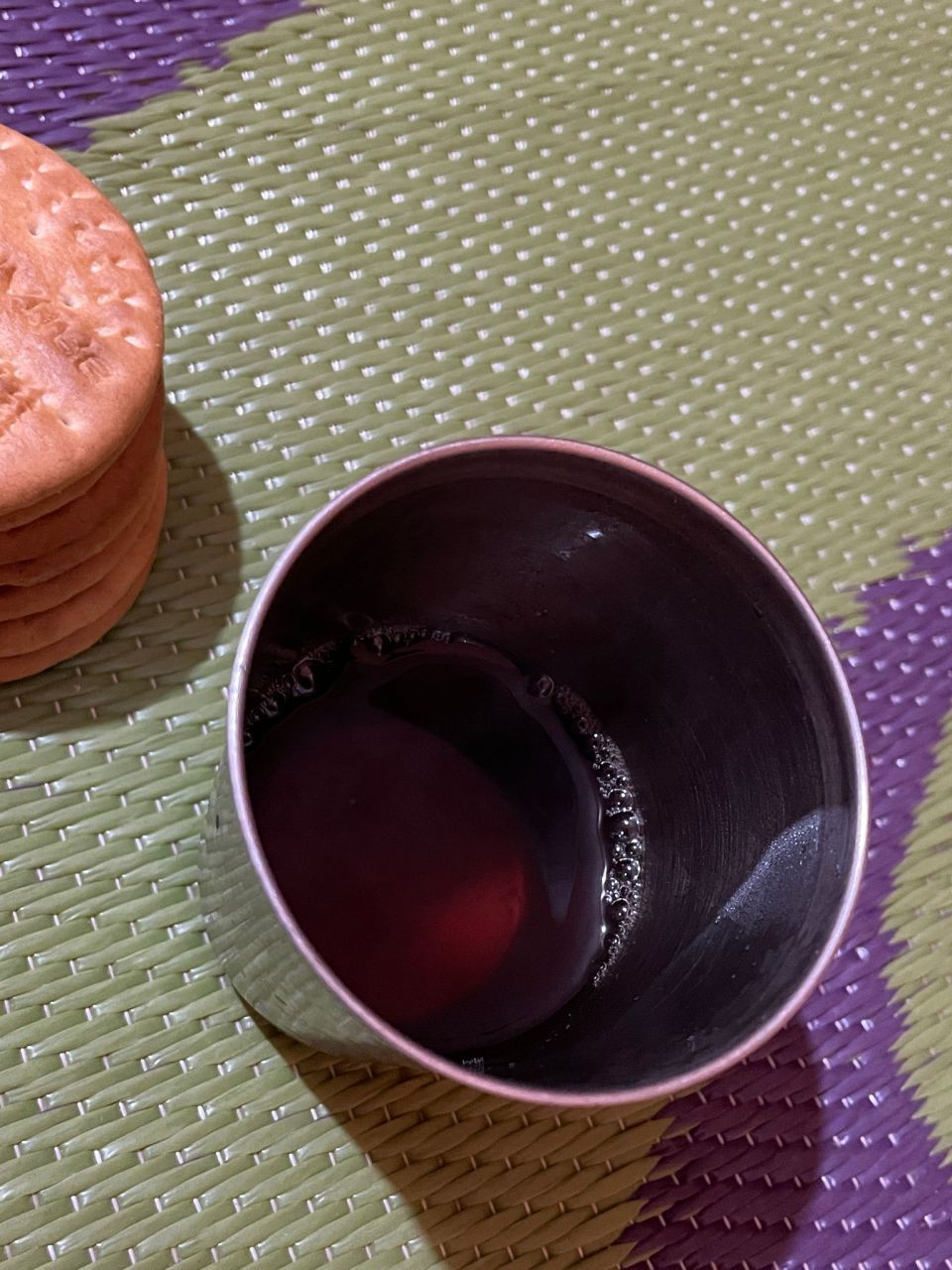 After listening to Baba speak for some time, we went to see the other senior sadhu, Vishwanatha Baba, who is above 90 years old, and has been a brahmachari from childhood (called as “bala brahmachari”). Both sadhus are disciples of the same guru, a powerful saint named Rama Baba, who entered samadhi in 2002. His samadhi is located in Jharkhand, near to Jamshedpur. 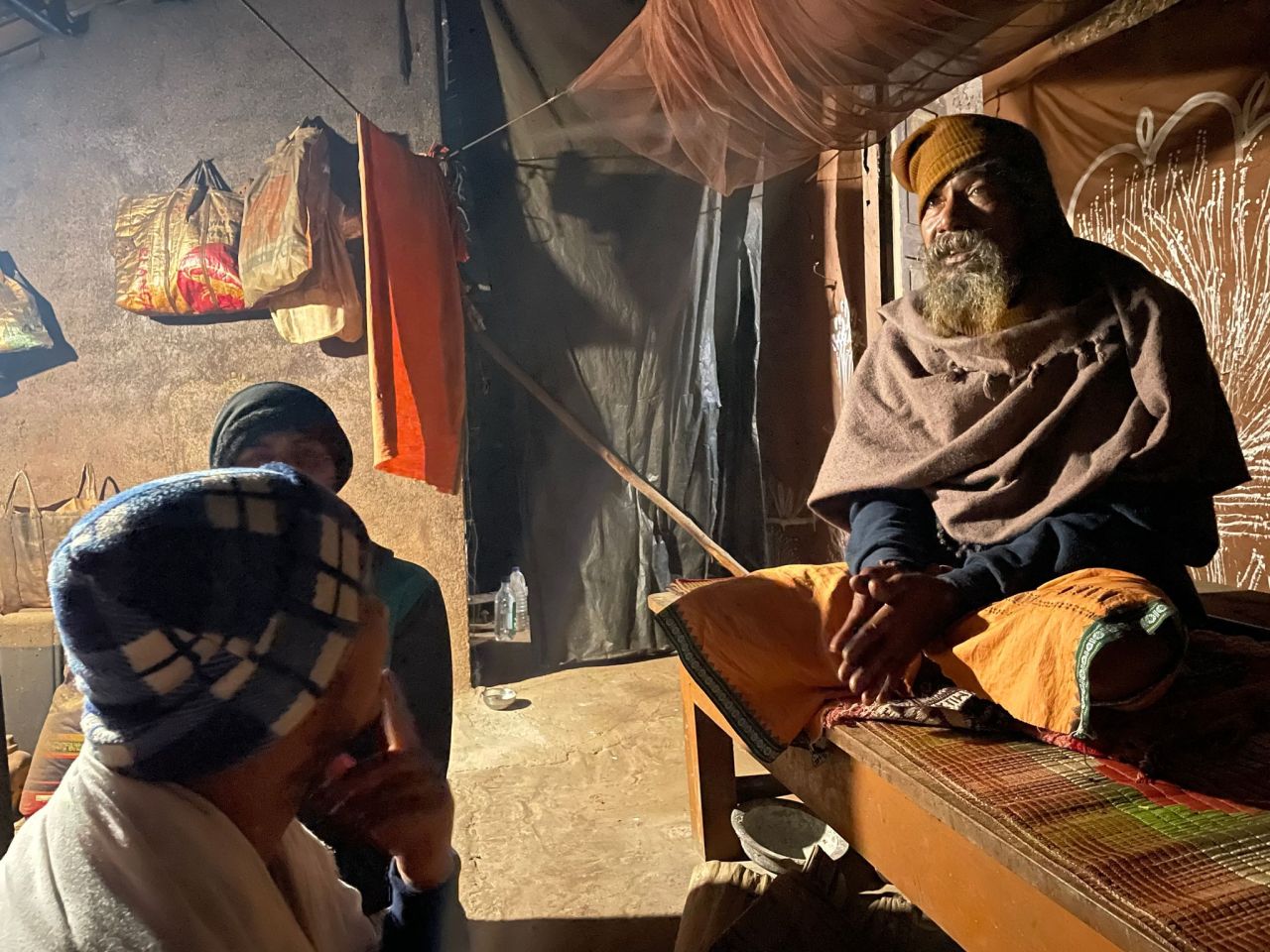 While Vishwanatha Baba spoke on spiritual topics, another younger sadhu prepared food for all of us on the wood fire nearby. 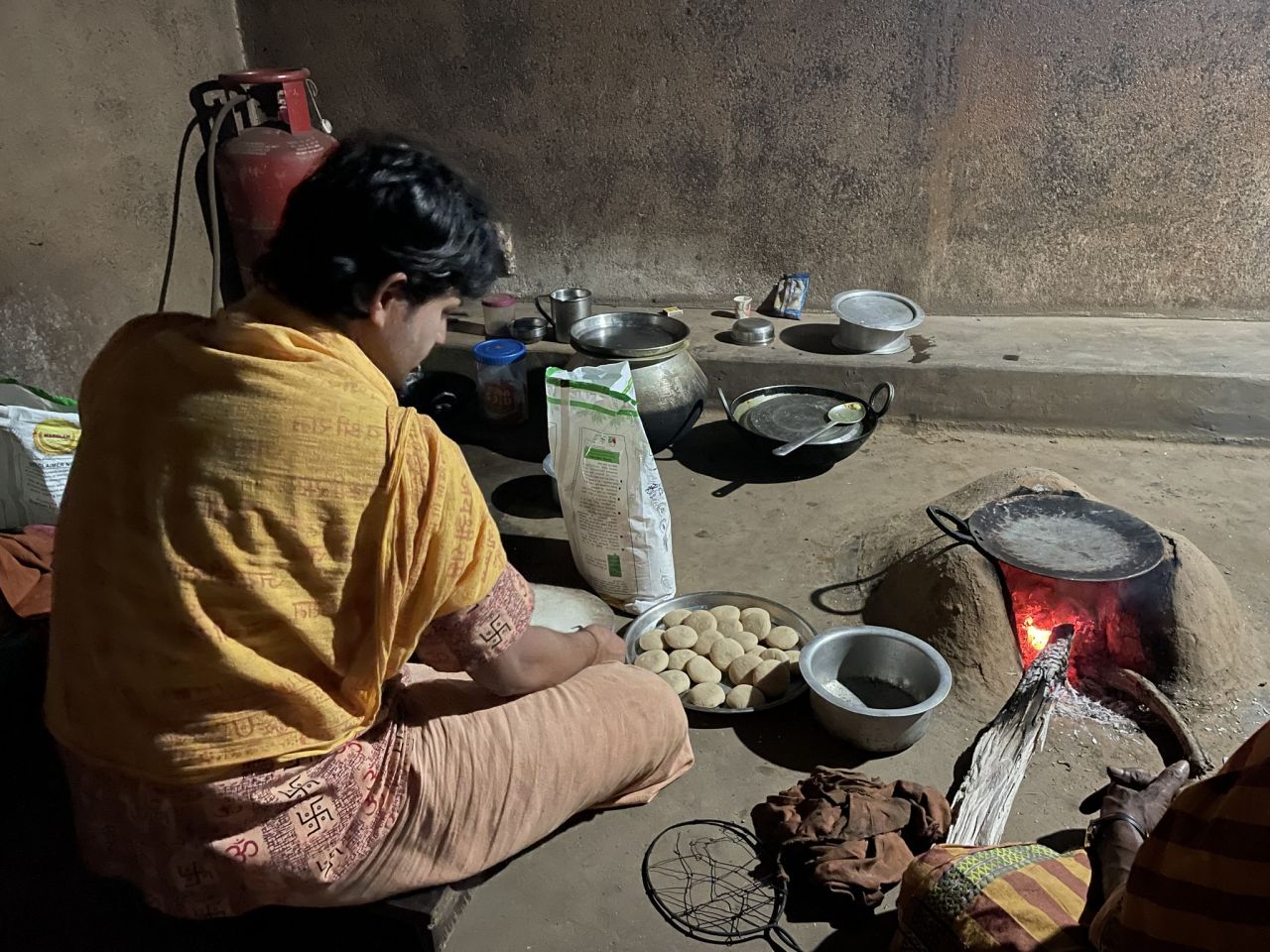 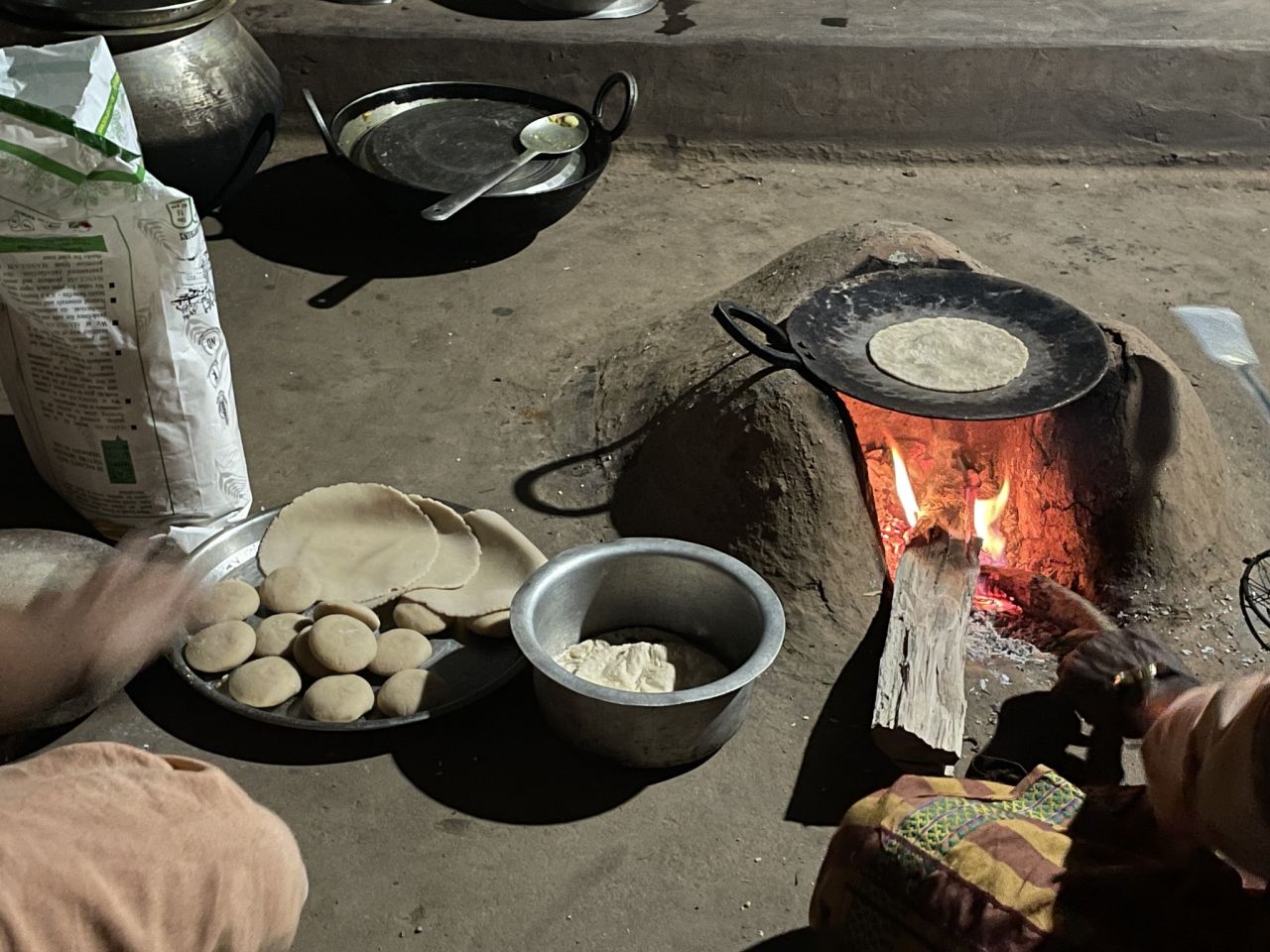 The photo below shows what they cooked. Everything was simple and perfect. They were the softest chapatis, and the dalma (a mixture of vegetables and dal) tasted good but was not spicy. The third item on the plate is a sweet chutney made from a fruit called “ou” (elephant apple in english). 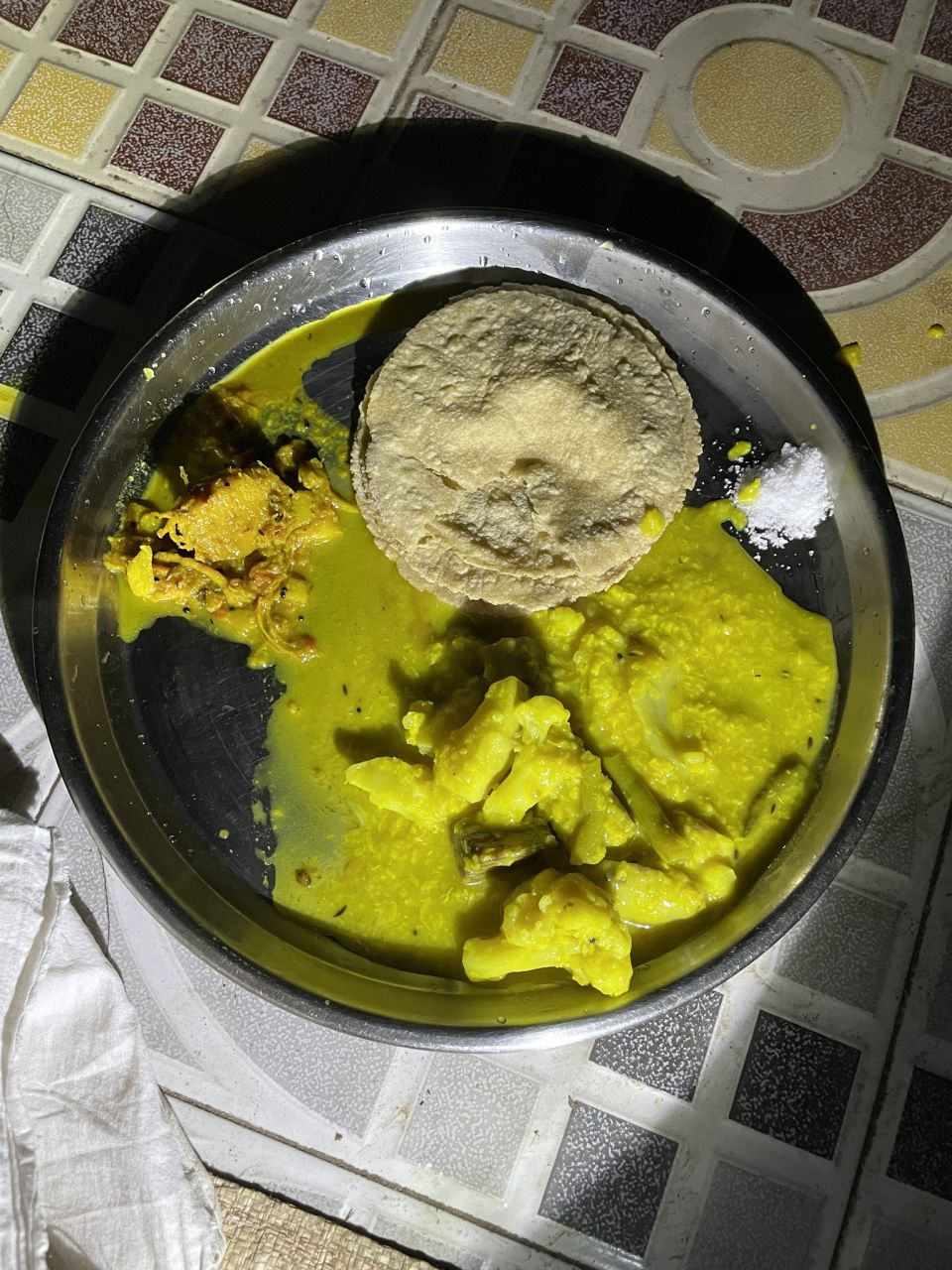 While sitting there, we could see next to us was the sadhu’s storage room, called as the “Lakshmi Bhandar”, which though simple was also beautiful. This is a mud room where the sadhus keep their ingredients for cooking, such as vegetables and rice. It is considered as the storage area of Goddess Lakshmi, and one of their sacred areas which they offer puja to each day. 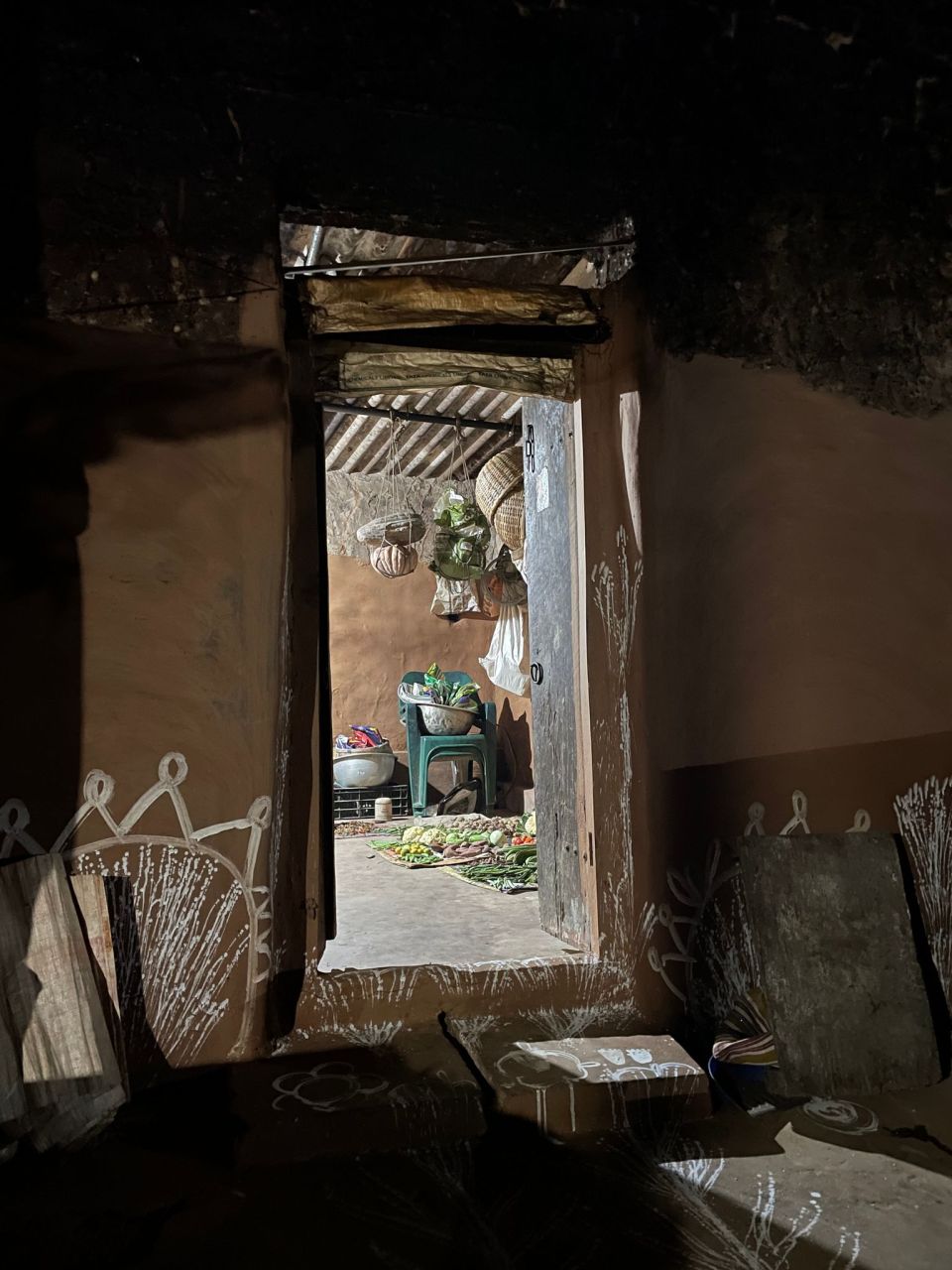 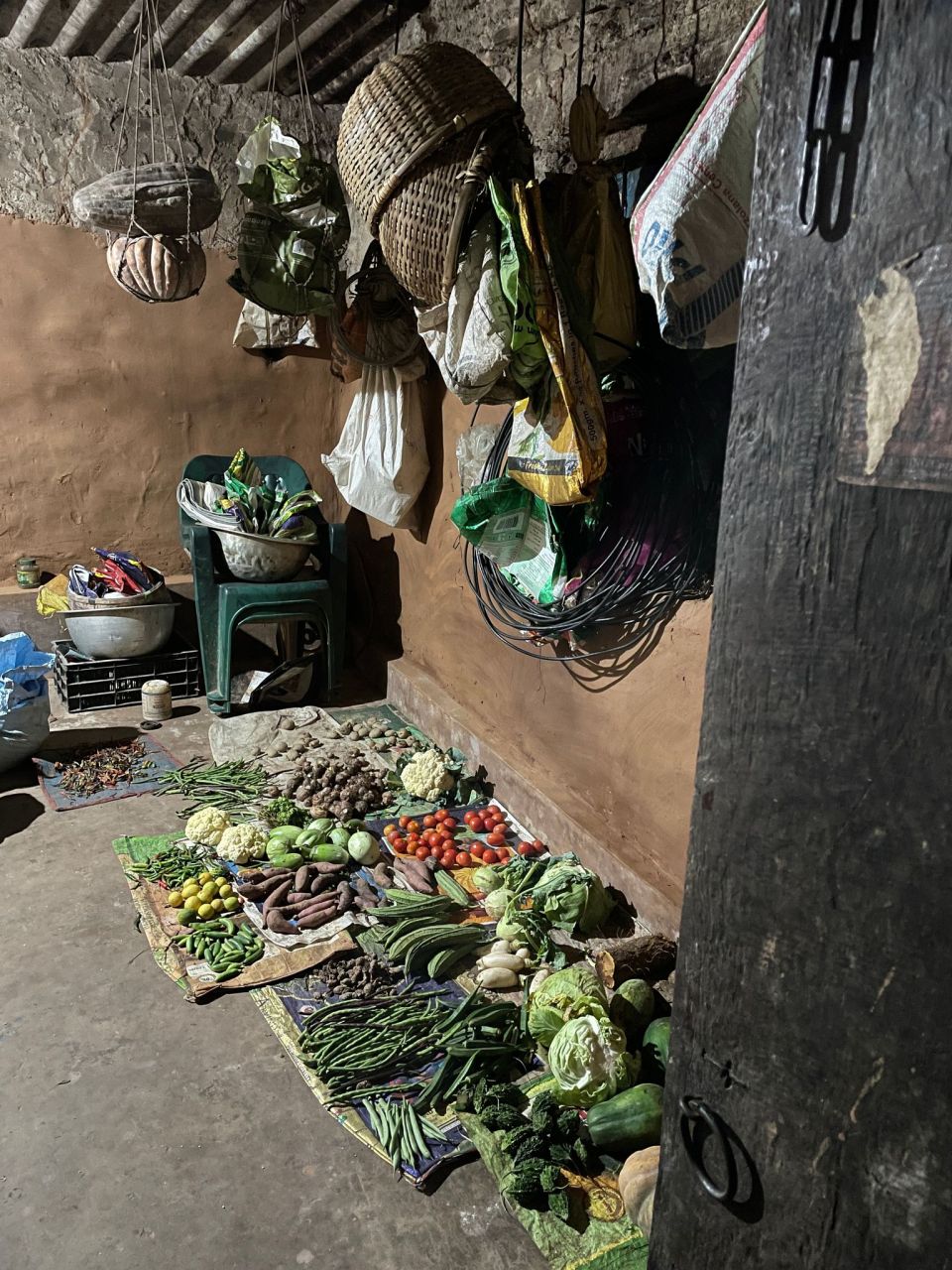 After the sadhus finished cooking, Vishwanatha Baba sat next to the fire and spoke some more. As it was December it was very cold, and being in the forest the temperature is much colder due to all of the trees that block out the sun in the day time. 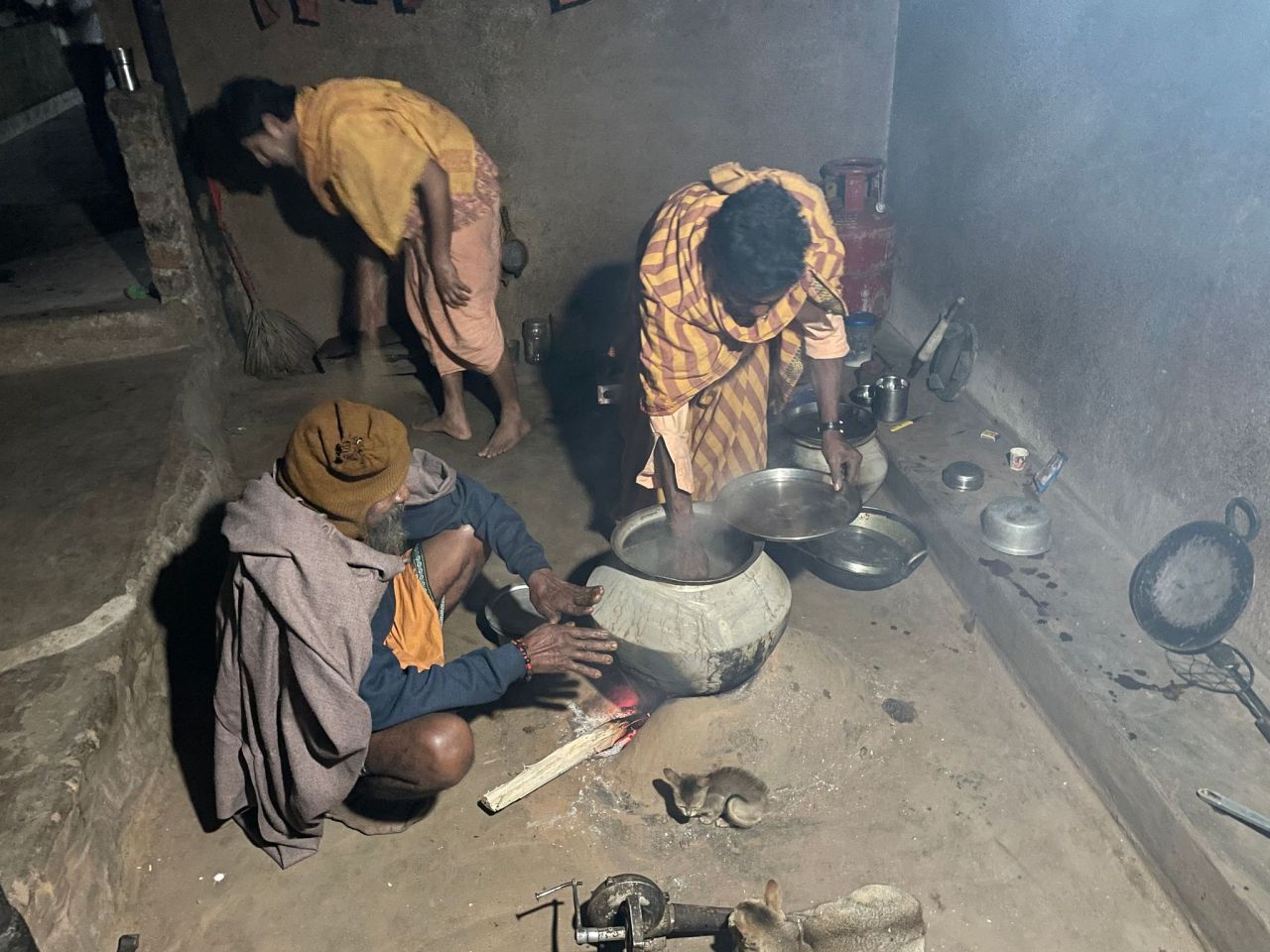 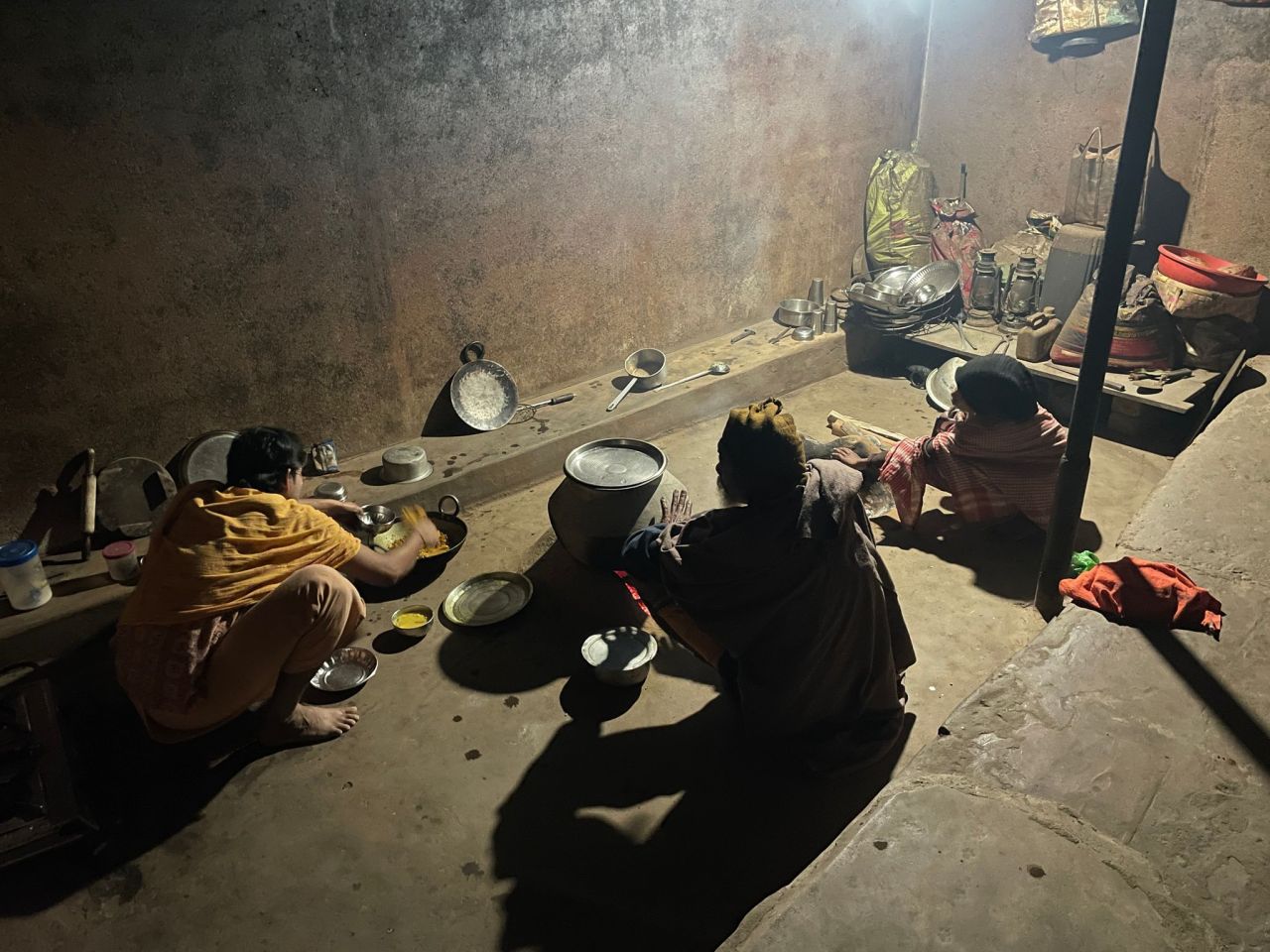 Here is the view outside of Vishwanath Baba’s hut: 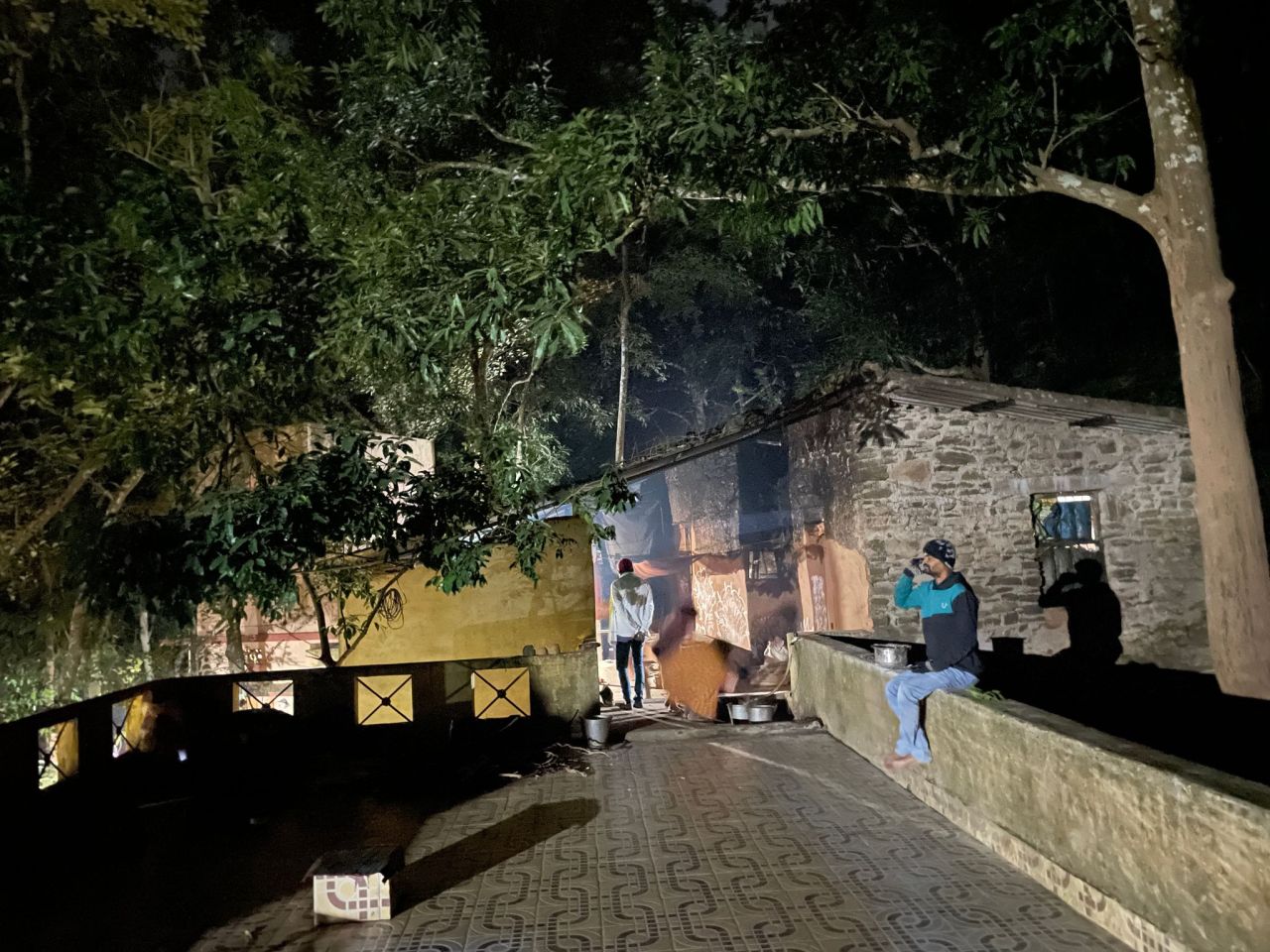 And here are a few pictures of the Shiva temple at the ashram: 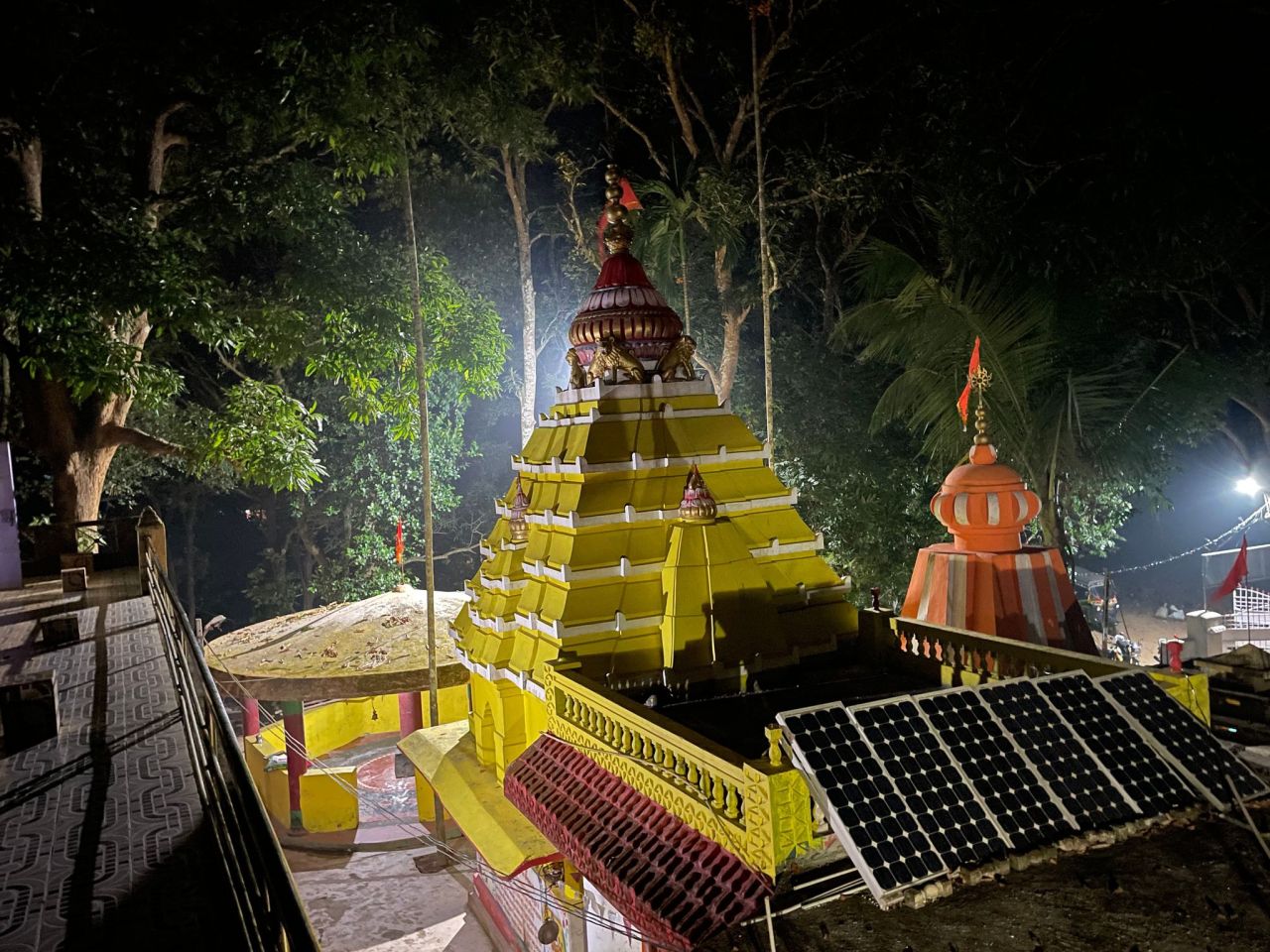 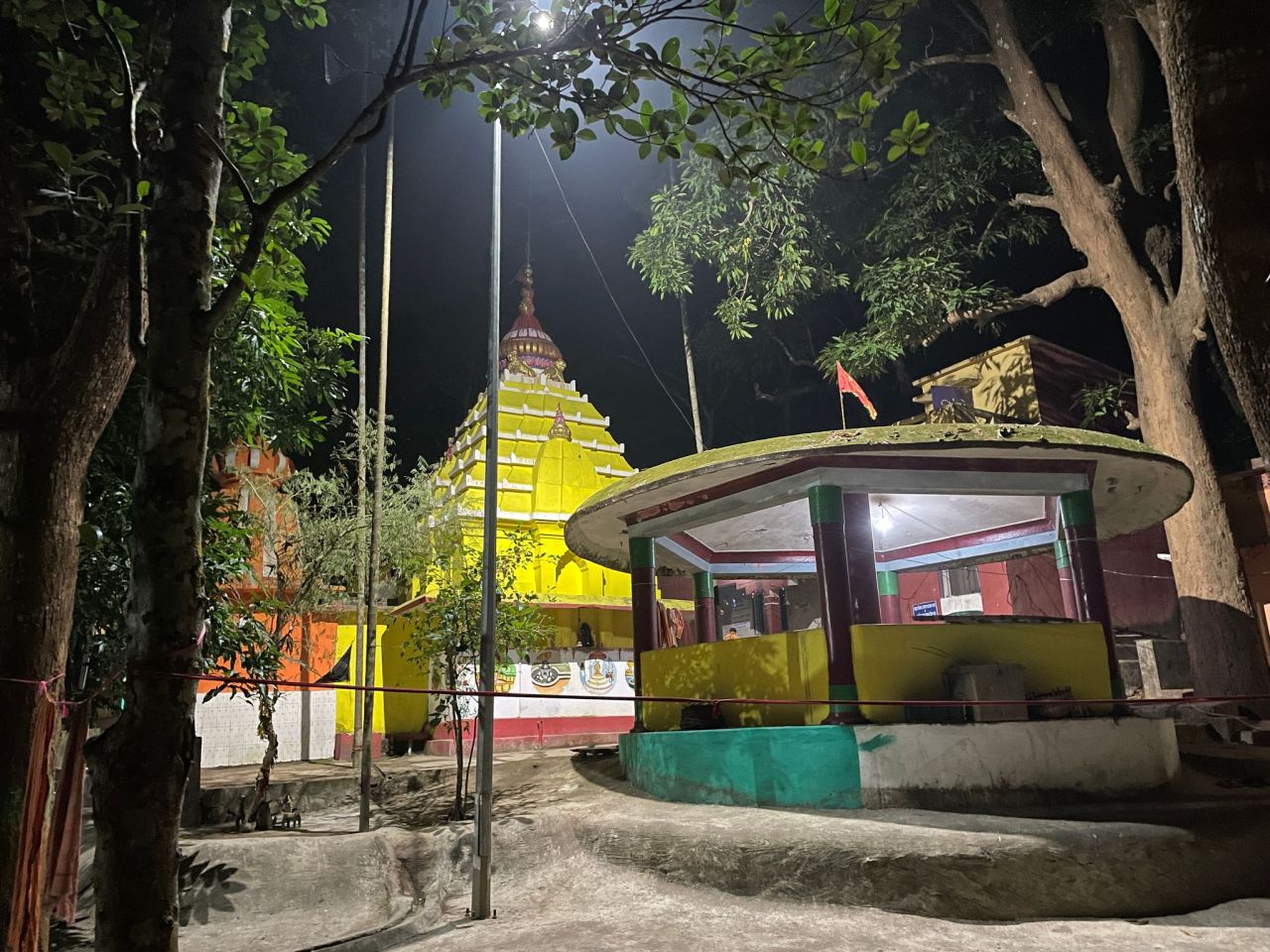 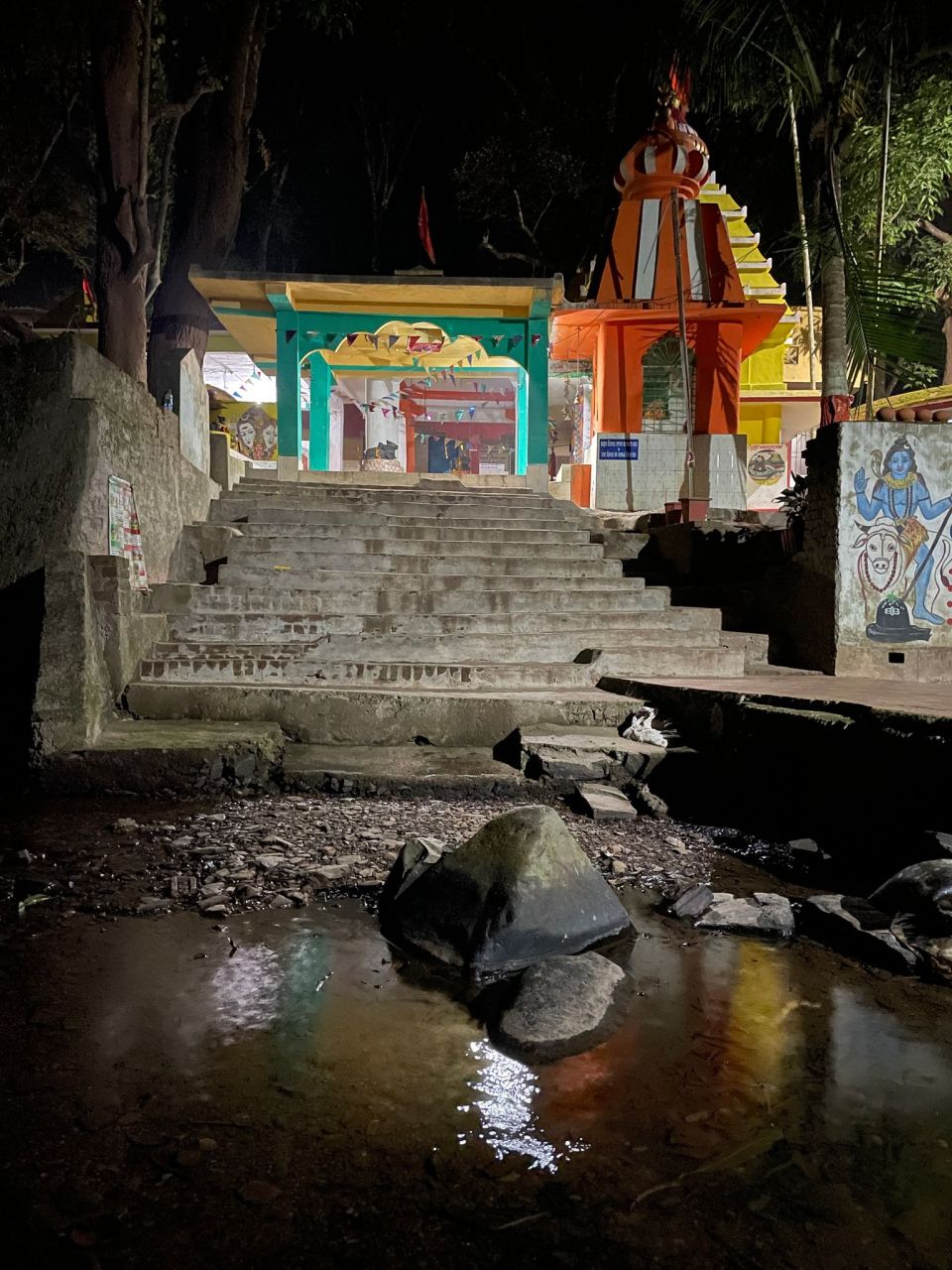 That night we slept outside under the tin roofed mandapa. Chakratirtha Baba had told us it would be very cold, so we should sleep in his room. We didn’t want to inconvenience him, so we gave some excuse and went outside to sleep, thinking our sleeping bags would be sufficient. That was definitely a mistake. In the night is was unbearably cold, not like in the city. The trees really make a huge difference in the temperature. The whole night we were just waiting for the sun to rise to give us some warmth. 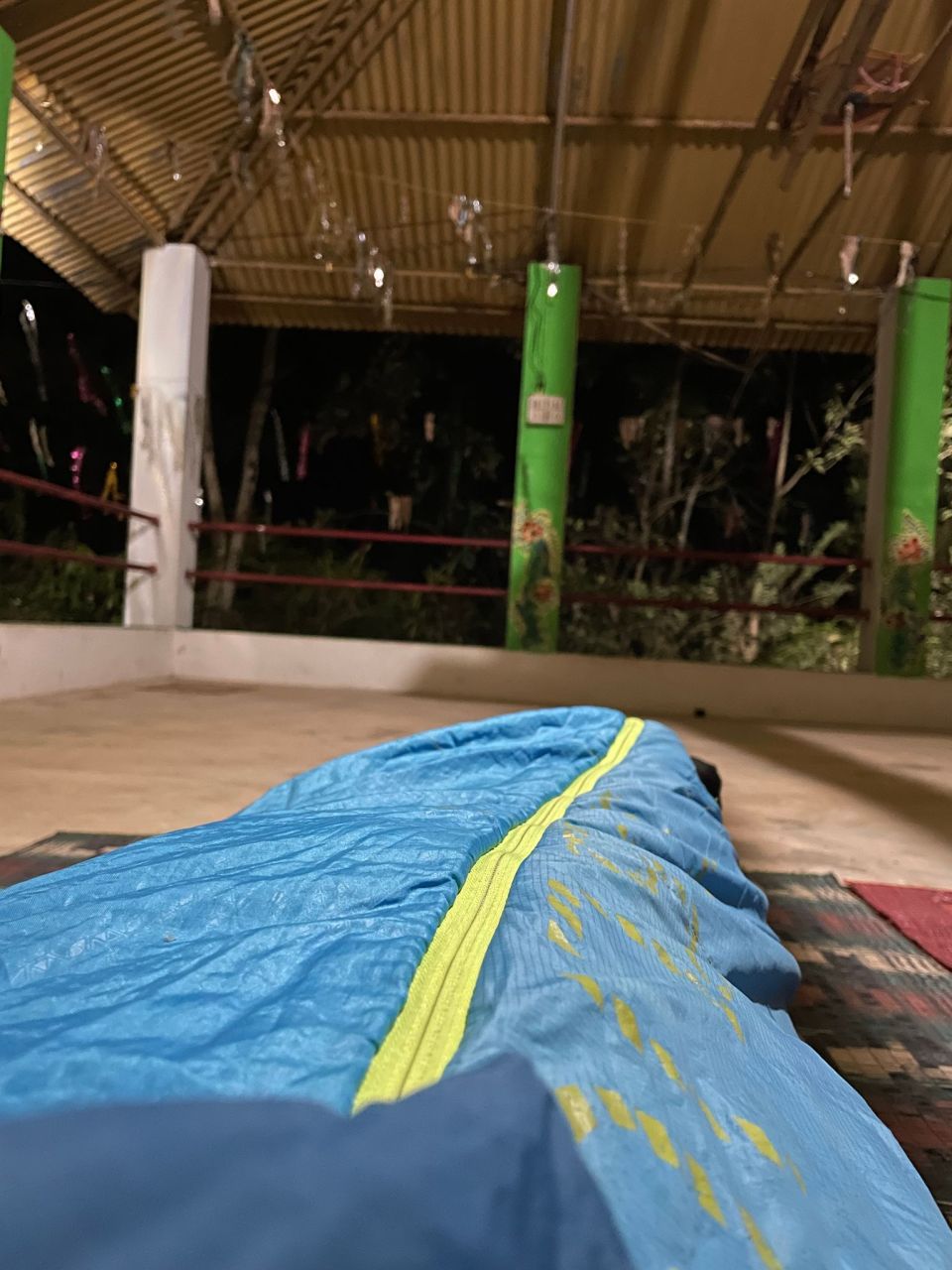 When morning came, devotees started arriving for the Gita Yagya festival. Throughout the day thousands of villagers came and the ashram fed everyone with prasadam. We spent as much time as we could with Brahma Chaitanya Das. He prefers to stay in the ashram’s garden away from the crowds, sometimes talking to visitors.

In this short video above we are sitting with Baba. On the microphone you can hear the purohit singing Sri Gurvashtaka prayers (of Vishvanath Chakravarthi Thakur), in their own tune. You can see baba repeat the refrain “vande guroh sri charanaravindam”, before he turns to the sun and prays to Him as the original guru and representative of the Lord. (The adivasi tradition in Odisha gives the most importance to the Sun as representative of God).

After he states that water, wind, fire, all of these elements are created by Him. Then he points to the river and says, “He has created this machine and it is running for yugas and yugas, but your machines only last for a short time and go bad after some time. The machines created by the Supreme Lord in the material nature run for yugas and yugas and never fail.” 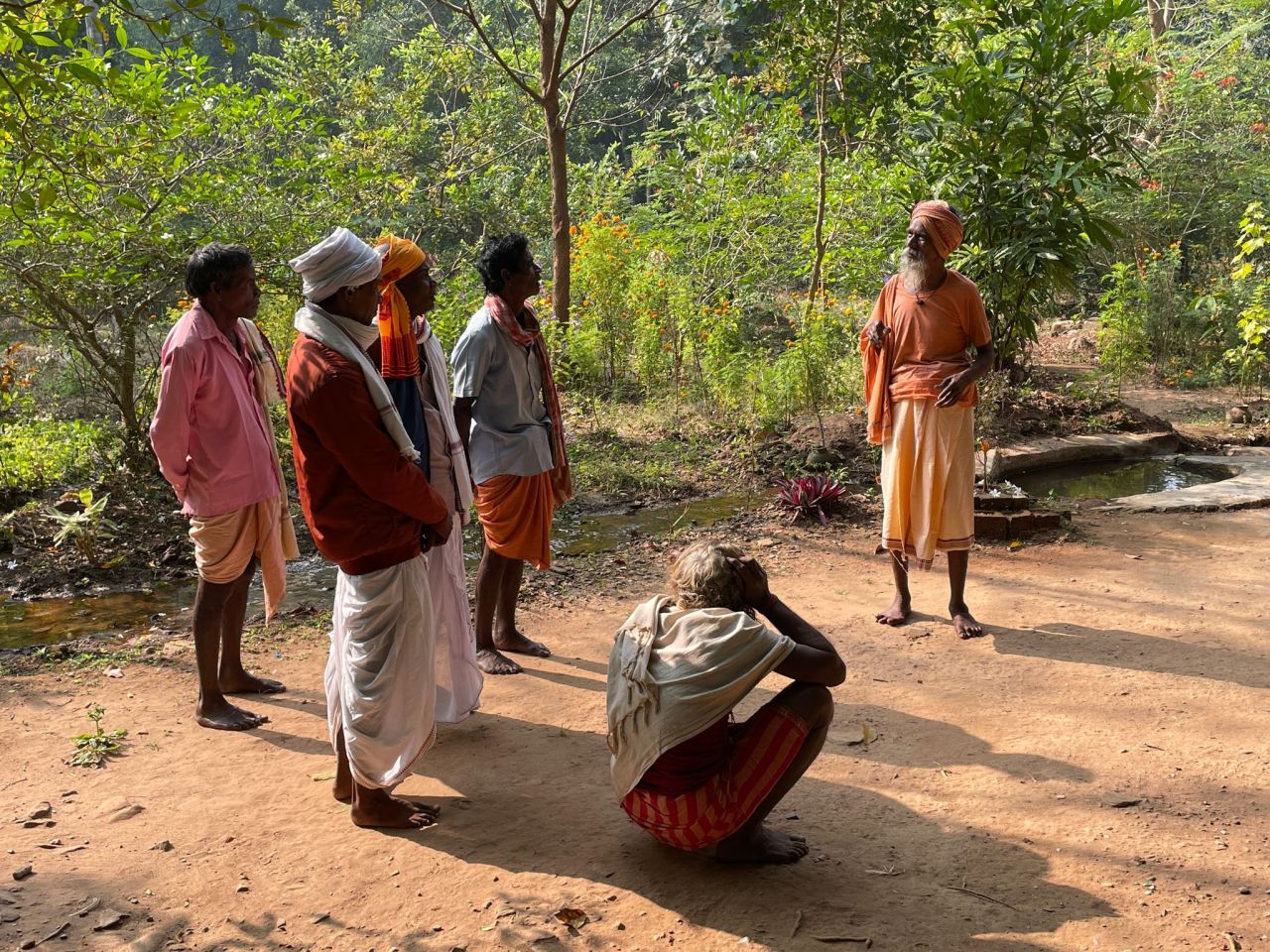 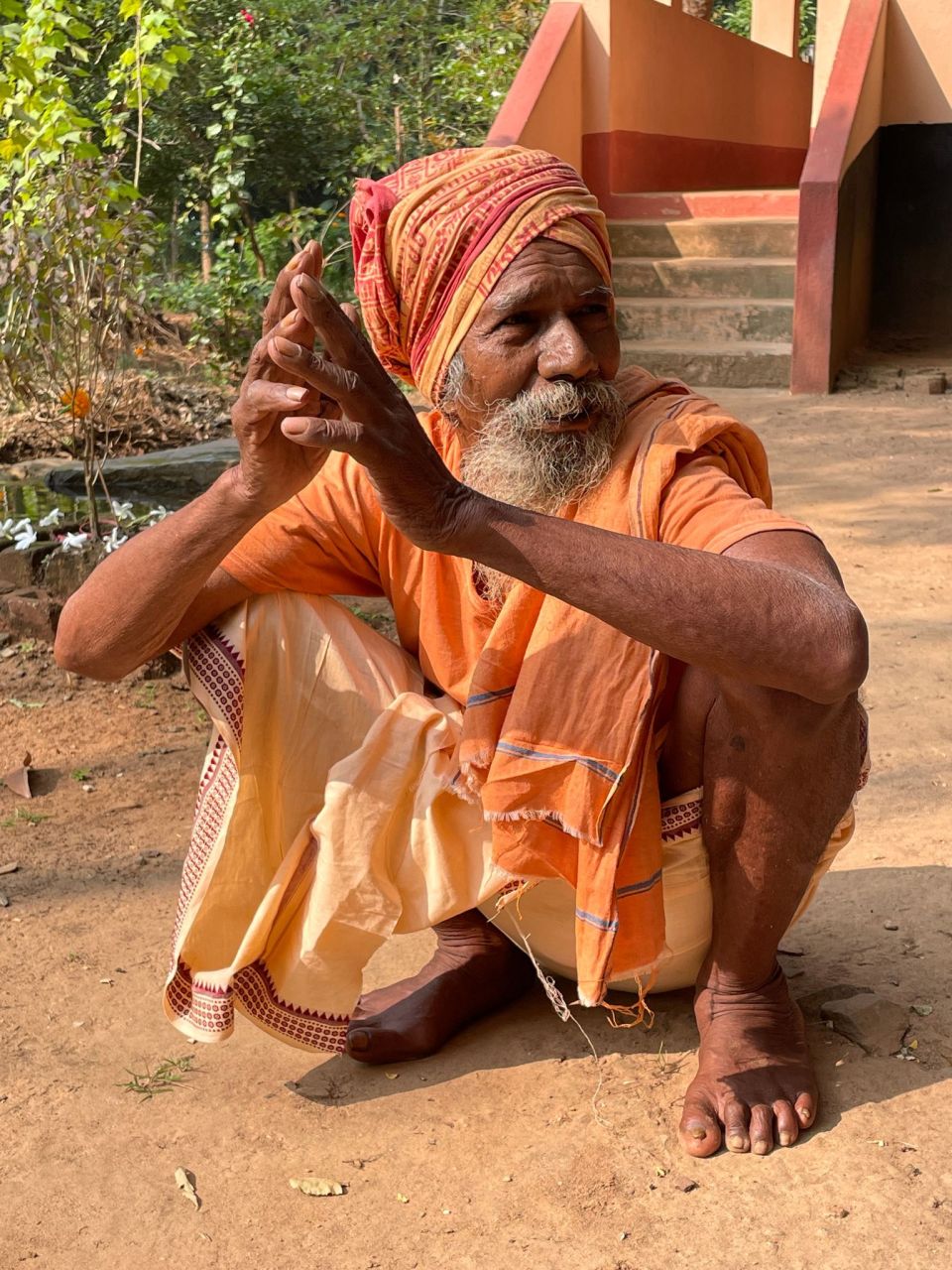 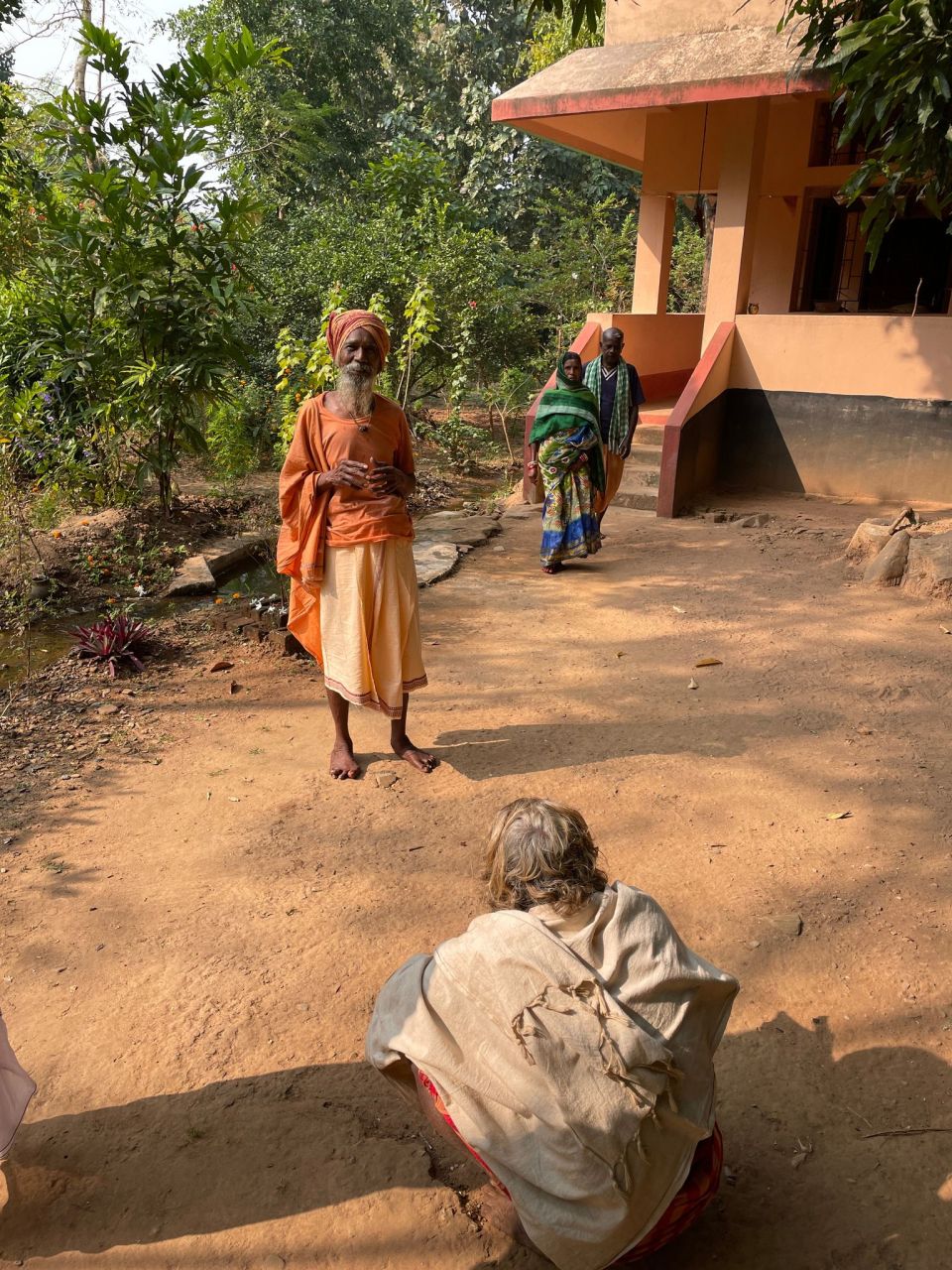 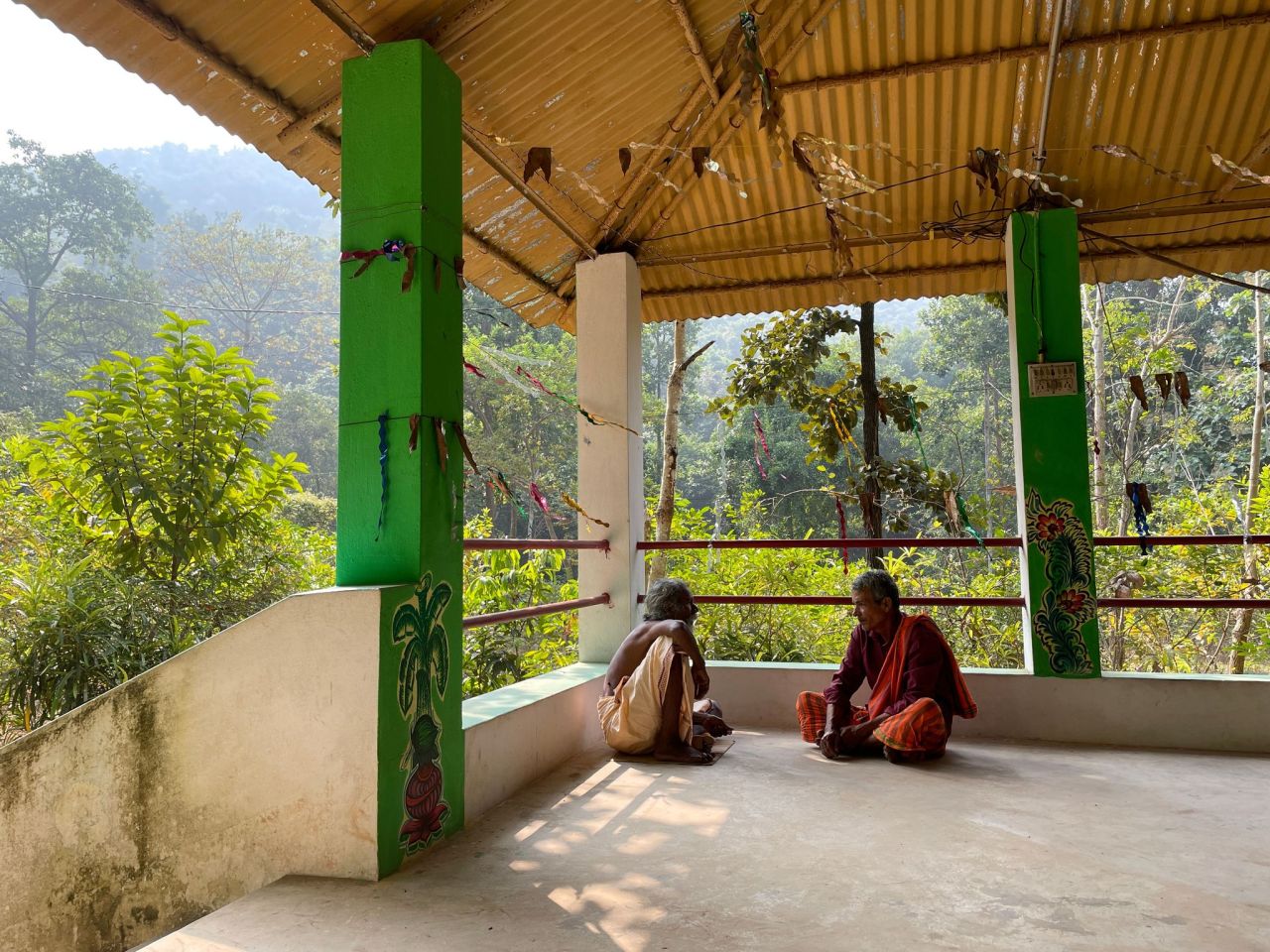 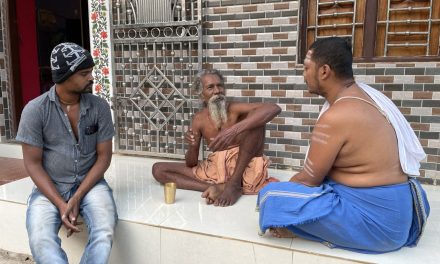 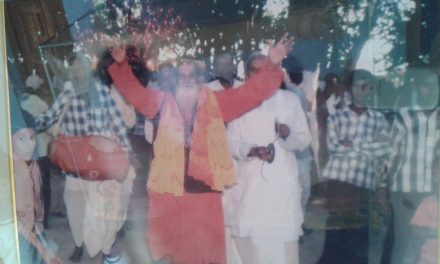 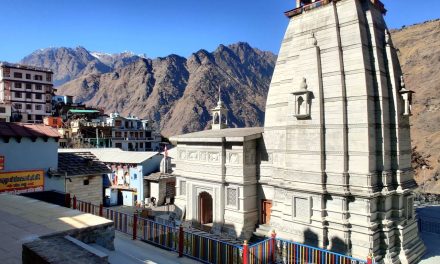 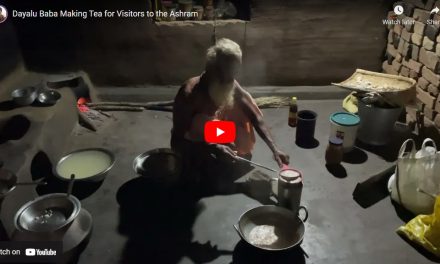