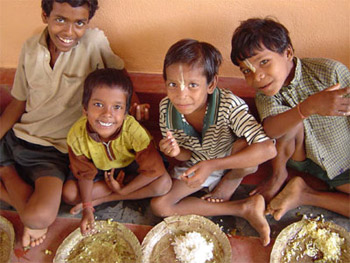 This month we have completed a new annadana hall at our Ashram in Bhadrak, Orissa where we are conducting the Nitya Annadana Seva program for daily feeding needy children with spiritual food. Below you can see some of the pictures of the hall from the beginning stages up to completion. We had hoped to complete this hall before the commencement of the rainy season, but due to several delays we were only able to finish the work half way through the rainy season. Despite the delay the hall will provide us with a great relief for the remainder of the year allowing us to continue the distribution of free food regardless of weather conditions.

In the past we were always at the mercy of the weather, and as soon as it rained our program of food distribution would have to be cancelled or delayed till the weather cleared. Even on days when there was no rain, the children would still face difficulty from the scorching summer heat which is almost unbearable. Now with the new annadana hall, the children can enjoy their meals without disturbance.

The main frame of the annadana hall is made from iron, but from the ground level it has concrete pillars going 10 feet into the ground for a strong foundation. We chose to utilize iron instead of concrete for the main frame so that in the future it can be easily unassembled and the entire hall can be moved to another location with little loss of money.

Once the frame was completed, we needed to attach the tin roofing. One of our volunteers had to go to the state capital, Bhubaneswar, to buy 1,000 sets of special nuts and 4 inch bolts to fix the tin roof to the iron frame (they are a special “J” shaped bolt). These nuts and bolts weren’t available in Bhadrak because in this area no one makes the roof frame out of iron, everyone uses wood. For wood frames they use an “L” shaped bolt system to attach the roofing. Our volunteer had to spend an entire day searching throughout Bhubaneswar for a shop that sold them, and finally by nightime he had located only 800 pieces (enough for the roof, but not for the verandas). A second trip two weeks later was required to locate another 200 pieces to use for the veranda roofing.

Before completion of the annadana hall we had switched from distributing rice, dahl and subji to distributing puris and subji. This was because if it would rain the children could carry the puris and subji in their hands and eat it at home. With rice and dahl we wouldnt be able to serve anyone if it started to rain. Of course the children like puris and subji best, but it is much harder to make and more time consuming. To feed the children we need to hand roll thousands of puris and fry them quickly in oil. Not an easy task when there are hundreds of hungry children waiting to get a hot puri. Just to get an idea of how much each one eats, last week I saw one small child eat 37 puris with subji; I didnt think it was physically possible. Another handicapped man ate 48 puris! Personally I can only manage to eat 4 or 5 puris at most, but these small children are able to eat nearly 10 times that. You can imagine how many puris have to be rolled by hand to feed 200 of these children.

Completion of the annadana hall was delayed slightly due to faulty estimates provided by the workers. We soon realized that all the estimates given for completion of their work were both too short and too cheap. In Orissa workers have a tendency to give optimistic estimates in the hopes that it will convince you to carry out the project. They think if they give the actual estimate it may discourage you from undertaking the work. Thus they will tell you they will make everything in 15 days, but once the work starts going on you find out it will actually take them one or two months; and they will say they need to use only 500 kilos of iron, but as the work goes on you find out it will actually require 1,500 kilos. This type of misinformation is too common here, so we have to adjust all of our estimates taking such things into account. The workers fear if they tell the true cost or time involved, you will go to some other worker who will give a lower estimate. There is no real gain to them other than to secure the work, as their labor fees are fixed before hand.

For our next project we have already stocked up on 30,000 bricks, piled up throughout the Ashram land, to begin construction on the Bhaktivedanta Ashram School Project. New bricks won’t be available till the end of November due to the rainy season, so we had to purchase the bricks ahead of the rainy season. Bricks can only be made in the sun where the fire will burn hot. Since we plan to start building the Bhaktivedanta Ashram School in the coming month, we stocked up on some extra bricks to be safe. Most of the beginning work will involve concrete for the foundation, so we shouldn’t need too many bricks right away. We had hoped to begin work on the foundation a little earlier, but due to the delays in completing the annadana hall we have had to adjust the starting date a little. 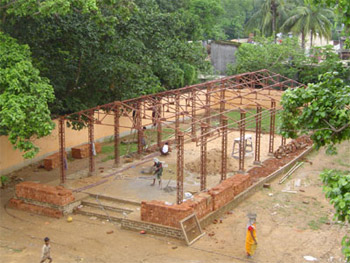 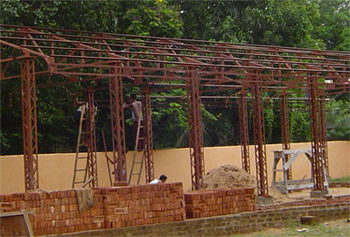 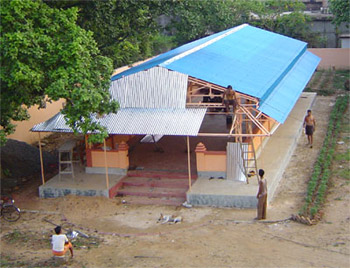 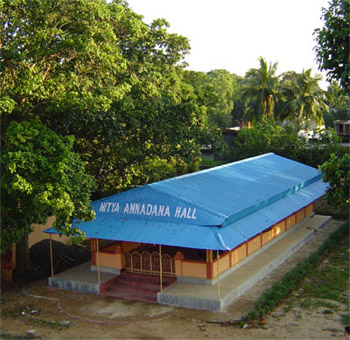 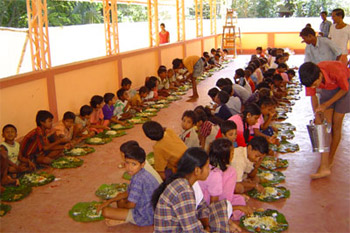 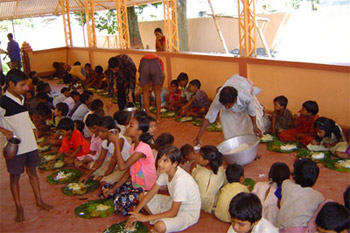 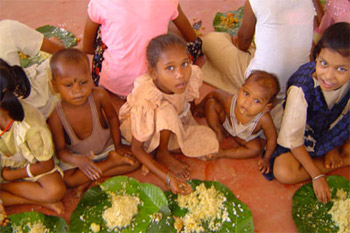 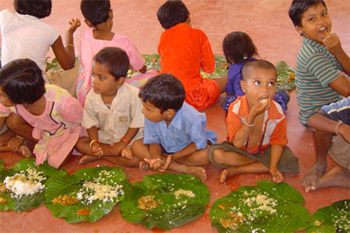 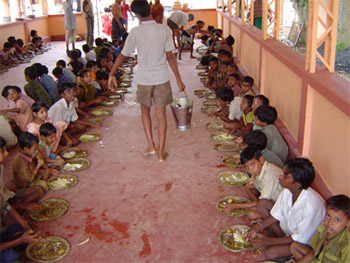 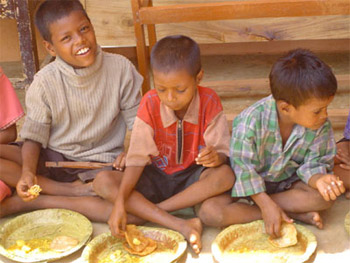 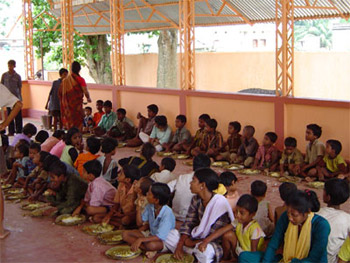 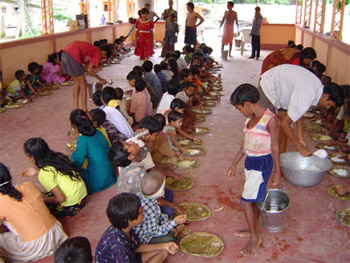 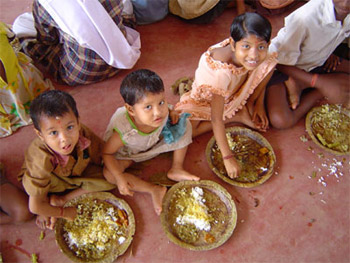 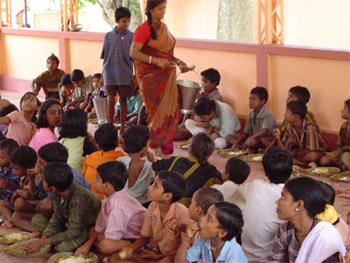 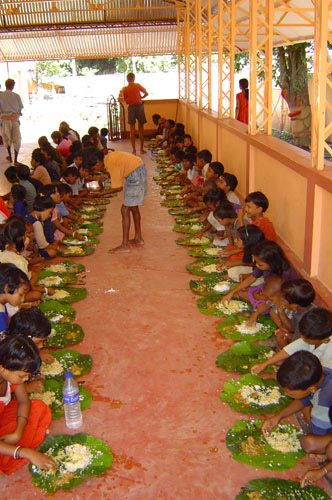 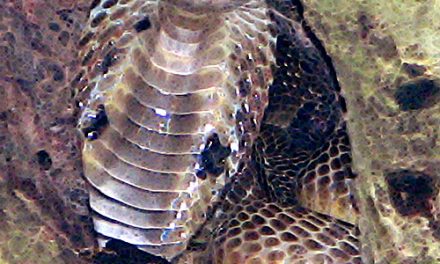 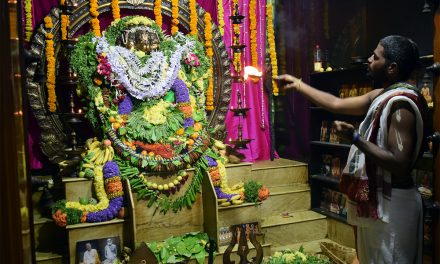 Hanuman Jayanti Celebrations at Our Ashram in Chennai (December 25th, 2019) 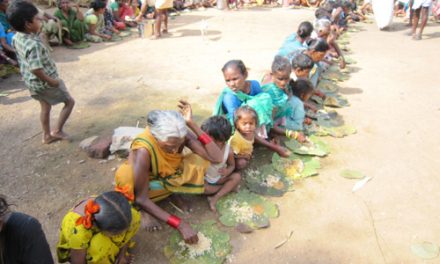 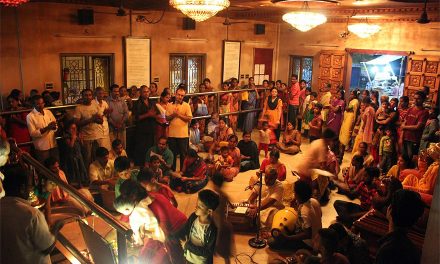 Deepotsava at Bhaktivedanta Ashram in Chennai